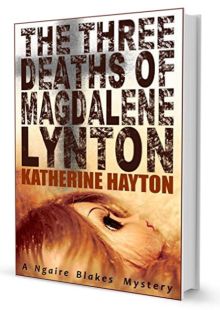 So why has Paul Worthington just confessed to her murder?

Is it possible for her to uncover the third death of Magdalene Lynton when time has eroded the evidence?

And will the person responsible let Ngaire live long enough to try?

You can purchase a copy of this book on AmazonUS / AmazonUK.

After sustaining a serious injury Detective Ngaire (pronounced Ny-ree) Blakes is confined to desk duty, much to her frustration. But her life suddenly gets a lot more interesting with the arrival of Paul Worthington, a man walking on borrowed time, at the police station. Mr. Worthington confesses to having suffocated Magdalene Lynton, a 15- year old girl, 40 years prior. Afterwards he disposed of her by throwing her body in the river nearby.

When Ngaire drops the name of Magdalene to her reporter friend Finlay, he knows exactly who she’s talking about, only he has it on good note that she wasn’t found in the river but in a slurry on the commune’s property where she lived.

When Ngaire and her colleague DC Deb Weeks want to interview Paul again to point out the inconsistency in his story, a lawyer is suddenly by his side. William Glover grew up on a farm near the Christ Cult commune and knew Paul when they were teenagers. Does he show up because they were such good friends at the time or to make sure his friend doesn’t say too much? Why would Paul lie and why has William Glover suddenly shown up like he did? Moreover, when the female detective duo Ngaire and Deb contact Magdalene’s parents to inform them that someone has confessed to murdering Magdalene, their reactions are not what they were expecting them to be. As they question the other remaining members of the church cult, by now dispersed everywhere, they stumble upon more irregularities in their testimonies about the night she was last seen. It is up to Ngaire to uncover the secrets that were buried with her so many years ago, and for once and for all determine how and where she died, and who was responsible for her death most of all.

This was a good police procedure, maybe a bit slow to start and to get into but it picked up and got a whole lot more interesting from the moment that Ngaire got herself in some danger. As often is the case, she’s the impulsive one and she tends to go solo whenever she thinks of it. She was likeable although I didn’t connect with her and Deb as much as I’ve done with some other detectives. I also didn’t really feel the bond between Ngaire and Deb. They are a good duo but, although Deb seems to watch out for her colleague, their supposedly friendly relationship doesn’t really show through in dialogue or body language. Fans of the Camilla Lackberg series will probably enjoy this one very much.

I received a free copy of this novel from the author via Kindle Scout.

One thought on “The Three Deaths of Magdalene Lynton”