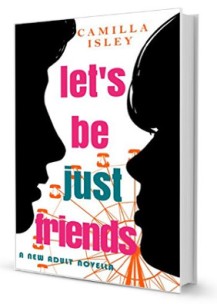 Rose Atwood has been in love with her best friend since she was twelve years old. The only problem is, he’s the biggest player to have ever landed on Earth. Rose has waited forever for Tyler to grow up, all the while keeping her feelings under wraps for fear of getting hurt. But after watching Tyler go through girl after girl, Rose has lost hope he’ll ever change.

Being Tyler’s best friend is becoming more difficult with every passing year and every new woman in his life—especially when the girlfriend du jour is Georgiana, a snotty, beautiful girl who’s in Law School with them and who never leaves Tyler’s side.

When Rose, dumped by her long-term boyfriend, moves temporarily into Tyler’s apartment, tension spikes. Georgiana wants Rose out of the house. Rose wants Georgiana out of Tyler’s life. And Tyler … well, he doesn’t really know what he wants.

As an unexpected argument brings Rose and Tyler closer than they’ve ever been, they must decide if there’s more to their relationship than being just friends. And they must do it quickly, as Georgiana is determined to do everything in her power to keep Tyler and Rose apart. After all, all is fair in love and war.

Will Rose make a leap of faith and trust Tyler with her heart?
Will Tyler make the right choice, or will he be too late?

You can find this FREE novel on AmazonUS / AmazonUK.

This was my first book by Camilla Isley, although she has already captured my interest in the past. I’ve got at least another 2 of her books on my wishlist because those covers really caught my eye, they are so attractive (pink rules!). But I saw this one was for free so I thought I’d read this one first to see if I’d like her style and boy, do I !

Rose and Tyler have been best friends since childhood. These last years there was always some sort of attraction between them and they both thought that they’d grow old together in the end, but the timing was never right for getting together so far, until one day they both cross the friends line unexpectedly. Not willing to risk damaging their friendship Rose is clear she doesn’t want a relationship with Tyler. They try the friends with benefits thing but just when Rose thinks she might have made a mistake and maybe she should take a leap of faith, she meets Ethan at a birthday party and finds out that Tyler just won a scholarship sending him 6 months abroad with his girlfriend Georgina.

The big question is what will happen in 6 months’ time. Will Tyler leave Georgina, will Rose choose Tyler over Ethan, or has their chance at being more than friends passed?

If this was Camilla Isley’s first NA novella, she definitely has the mission accomplished with flying colors. This short story is easily read in one sitting. Let’s Be Just Friends was entertaining and enjoyable to read and I really liked that we get the views from the three main characters. Rose, Tyler and Ethan’s voices alternate in short chapters but she does it really well, there is never any confusion whose voice we’re hearing. I did feel quite a few different ways about Tyler throughout the story, going from really liking him at the start, to not sympathising at all in the middle and back again in the end. Ultimately I felt sorry for him that Georgina managed to have him in her hold like that. I would’ve tweaked the ending a little to satisfy my own wishes but I get it, I really do. It’s not good for my heart though, with two handsome and good-natured boys and knowing one of them will not end up with her by his side.

After finishing this, I can honestly say that I want to find out what more she has in store. I really want to read another book from this author.