Have you ever wondered who that person is behind the blog Inked Brownies ? Have you seen the amazing raving review Anne wrote about the novel The Summer That Melted Everything? She sure knows how to sell a book ! Well she’s also my BFF from now on and I asked her a few questions so we could get to know her a little better.

I first studied History and how to be a high school History teacher. I love history, but holy shit, those kids?! I quit after a short internship at my old high school when I realised that teaching is not for me :D. Then, I decided to study Arabic because it annoyed the crap out of me that I could never understand my Moroccan friends. Turned out they speak an Arabic dialect, so I ended up learning both of the dialects (and it almost completely sank into the deep dark depths of my brain again). After that, I followed some small courses here and there (herbalism being one of them), and four years ago, I decided I wanted to get a higher degree in something meaningful, so I started Environmental Sciences at uni. I’m going to save the planet!!!! Right…

When it comes to jobs: I worked in a Fair Trade shop for eleven years, but quit last January because my illness (I’ve been suffering from ME for 17 years now) made it too hard to keep on going.

Do you have any other hobbies?
Besides reading and blogging? 😀 I like games, all kinds of them, but we (my husband and I) mainly have a massive collection of board (and card) games. I also like to paint, work in my garden, and play the piano.

Your favourite color?
Dark blue, bordeaux rouge, succulent plant green (is that even a thing?). Okay, I can’t choose!

Do you collect anything (besides books)?

Teapots, but I can’t say I have a massive amount yet because, unlike with books, you can’t just drop them in a pile on the floor. I need a bigger house is what I’m sayin’.

What’s the name of the book that you’ve had the longest? Have you read it?
The first book my parents bought for me and me alone was:

And of course I’ve read it!

Have you ever regretted a book you purchased? A book that sounded so promising but you wished you’d have spent your money on another book after reading it?
Oooh, more than once, for sure. There’s one book in particular that gives me a nasty feeling whenever I think of it, though. I reviewed it on my blog last year, and it wasn’t a mean review at all! I gave it 2.5 stars and tried to make the best of it, emphasizing the positives. Yet the author read it and said I was accusing her of plagiarism, threatening to take legal action if I didn’t remove the review. Of course, it’s still on there in it’s full glory because I really can’t see the harm in it. I do wish I would’ve never spent any money on it now, though because authors like that can [opens up random page of Memos to Shitty People].

Do you listen to audio books?
Yup, but only as a sleep inducer when going to bed. I try to listen to them when I’m in the shower as well, but try shampooing your hair and still be able to follow the story without putting it on the ‘ridiculously loud’ setting. Sorry neighbours! (okay, not really sorry actually because I have to listen to their lovely Frenchcore ensemble most days of the week)

Do you have a favorite genre?
I always seem to keep going back to some sort of Fantasy subgenre, but I love historical fiction as well!

What is the book highest on your wishlist right now?
Nevernight by Jay Kristoff.

Nevernight is the first in an epic new fantasy series from the New York Times bestselling author, Jay Kristoff.

In a land where three suns almost never set, a fledgling killer joins a school of assassins, seeking vengeance against the powers who destroyed her family.

Daughter of an executed traitor, Mia Corvere is barely able to escape her father’s failed rebellion with her life. Alone and friendless, she hides in a city built from the bones of a dead god, hunted by the Senate and her father’s former comrades. But her gift for speaking with the shadows leads her to the door of a retired killer, and a future she never imagined.

Now, a sixteen year old Mia is apprenticed to the deadliest flock of assassins in the entire Republic ― the Red Church. Treachery and trials await her with the Church’s halls, and to fail is to die. But if she survives to initiation, Mia will be inducted among the chosen of the Lady of Blessed Murder, and one step closer to the only thing she desires.

How is your library organized?
Not?! No, I do have a system, actually, but I’m buying too many books to keep up with it (and lack of SPACE!). I have two main book cases in my living room. That’s where most of my Fantasy books can be found. If you look at the pictures, you can see I organised (apart from the piles on top) the left book case by genre (Fantasy- and Sci Fi- ish) + alphabet (by the author’s last name).

On the right book case, it ends with Z somewhere in the middle, marking the end of that genre. Then the non-fiction/literary fiction part starts, again, alphabetised by the author’s last name. 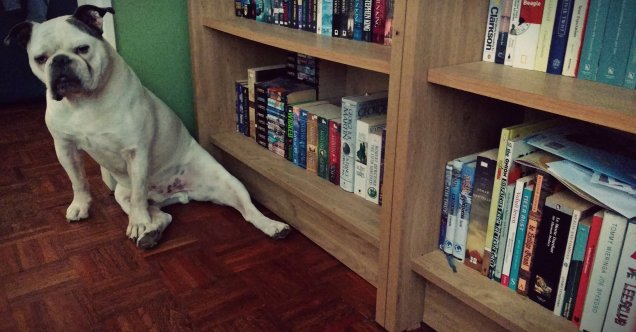 All of the other books aren’t organised at all. A pile here, a box ther

e. Half a closet full, a top shelf full. And then there are two attics filled with boxes with books.

The only thing that’s organised about all the books I own, is that I mark each and every single one I’ve read with a white piece of paper with a pink dot on it. I actually tape those pieces of paper to the book. Blasphemy, I know. And maybe a touch of OCD there as well 😉 but it works brilliantly for mapping my mind!

Do you read more ebooks or physical books?
Since my hubby bought me a Kindle, it’s definitely more ebooks (plus, hello NetGalley!!), but I do like the feeling of a hard copy in my hands more (and that’s what she said, hehe).

Do you have a favorite book?
I have favourites, plural. David Copperfield by Charles Dickens and The Wind in the Willows by Kenneth Grahame being two of them.

What’s the cover in your collection that you’re most proud of?
Plants That Heal. It might not look like much at first, but it is just absolutely gorgeous with a very thick cushiony cover and the edges of the pages painted gold. 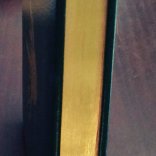 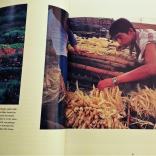 What’s the title of the last book you purchased?
I can’t answer that yet because it would spoil the surprise feature Liis and I have planned to do soonish, *cue dramatic music*, but I can give you the title of the book I bought before that: Memos To Shitty People: A Delightful and Vulgar Adult Coloring Book

What was your favorite author when you were a child?
Dick Laan and Paul Biegel, both authors of Dutch Children’s Books. And because Inge is from Belgium, I’m going to honourably mention Willy Vandersteen because I was addicted to his comic books for 20 years or so :).

From which author do you have most books?
That would be Terry Brooks, but that’s mainly because my husband brought those with him when he moved in with me. I’ve only read the first book in the Shannara series, so far…

Are there books you’ve read 2 or 3 times?
Charles Dickens’ collection of Christmas stories is something I try to read every year during the holiday season. Apart from that, I’ve reread several comic books, but not a lot of other/normal books come to think of it. I’ve read Of Mice and Men by John Steinbeck for the second time last year and could appreciate it a lot more than the first time I read it when I was a teenager.

How many books are there on your Goodreads challenge this year and how many have you read already?
50 and I’ve already read 64 by now!

Can you spell your name with the first letters of titles in your book case (name these titles+authors)?

A = An Ember in the Ashes by Sabaa Tahir
N = Neverwhere by Neil Gaiman
N = Nimona by Noelle Stevenson
E = Elfenster (Elven Star) by Weis&Hickman
M = Moab is my Washpot by Stephen Fry
A = A Little Life by Hanya Yanagihara
R = Ricochet by Judy Fridono
I = Ik wil trouwen! by Ghada Abdel Aal
E = (The Story Of) Edgar Sawtelle by David Wroblewski

Well that’s it for now. I hope it was as interesting for you as it was for me. If anyone else would like to be a BFF, let me know !