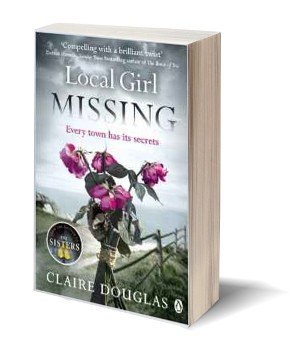 Twenty years ago
21-year-old Sophie Collier vanishes one night.
She leaves nothing behind but a trainer on the old pier –
and a hole in the heart of her best friend Francesca.

Now
A body’s been found.
And Francesca’s drawn back to the seaside town she’s tried to forget.
Perhaps the truth of what happened to Sophie will finally come out.
Yet Francesca is beginning to wish she hadn’t returned.

Everywhere she turns are ghosts from her past.
The same old faces and familiar haunts of her youth.
But if someone knows what really happened to Sophie that night then now’s the time to find out – isn’t it?

Except sometimes discovering the truth can cost you everything you hold dear – your family, your sanity and even your life . . .

You can buy a copy of this book on Amazon UK / Amazon US.

A real page-turner and another lesson that the past will always – always – catch up with you.

After 20 years, the remains are found of Frankie’s best friend Sophie. She went missing from a party one fatal night, never to be seen again. Her brother Daniel is convinced she was murdered and that she didn’t really fall off the peer by accident and he contacts Frankie, who agrees to come back and help him find out what really happened and identify her remains.

The chapters alternate between the past voice of Sophie, leading up to the night she went missing and the present investigation of Frankie. There’s a lot going on, both in the past and the present. There’s a secret Sophie and Frankie shared in the past which binds them and that might or might not have anything to do with her disappearance. While Frankie’s returned to Oldcliffe she starts seeing weird things, she hears babies crying at night, she finds cryptic notes delivered on her doorstep. Is it the killer trying to scare her away? Frankie is being haunted by Sophie’s ghost from the past it seems.

In the second half of the novel the story starts to knot together and the suspense ramps up. There are several characters who could have had a motive but the outcome of this book took me entirely by surprise! I thought I had it all figured out and knew who the culprit in the whole story was but it turned out I couldn’t be more off the mark. I love it when that happens and it turns out even better than you thought. Unexpected twists in the best way possible. A cleverly written book that had me engrossed for a good few hours and didn’t want me to put it down before I’d uncovered the truth, and what a truth it was !

This was the first book I’ve read by Claire Douglas, but it certainly won’t be the last! I can highly recommend this modern mystery! And now I’ll go and check out that other highly praised book, The Sisters.