Twenty years ago you were forced to give your daughter up. Now she’s back. Or is she?

Women who’ve had to give up children for adoption are being killed. A knock at their front door begins a nightmare from which they will never wake up.

Detective Ruby Preston and her team must hunt down a disturbed individual before someone else is taken. But just when they think they’ve made a breakthrough, Ruby receives a sinister email, and the case takes a terrifying personal twist.

When bodies start turning up, staged in perfect, domestic scenes, Ruby realises they’re chasing the most frightening serial killer she has ever faced.

Can Ruby catch the killer before they strike again? Or will her troubled past catch up with her first?

You can buy a copy of this book on Amazon UK | Amazon US.

A former police detective, Caroline has worked in CID and specialised in roles dealing with vulnerable victims, high risk victims of domestic abuse, and serious sexual offences. Originally from Ireland, Caroline lives with her family in a pretty village on the coast of Essex. She now writes full time.

Published by Bookouture, her DC Knight crime thriller series reached the number one position in the Amazon crime charts. Love You To Death, the first in her new series featuring DS Ruby Preston is due for publication 11th November 2016.

Her new psychological thriller, Witness, is published with Thomas & Mercer and due for publication 20th December 2016.

Sign up to join her Reader’s club for access to news, updates and exclusive competitions and giveaways.

It’ll be difficult not to think about what happened in this book when looking at my Christmas tree this year. Forget the happy go merry atmosphere here, the women in this book have little to look forward to. Strapped in a chair in the very first chapter, Emily is the subject of Lucy’s scrutiny and expectations as she’s looking for her mother. Not just any mother but the perfect mother to be more clear. There is no room for error you see and all Lucy wants is the right answer to the question she will ask. A mother who will love her and spend Christmas with her and all will be perfect. Lucy, oh Lucy is creep-tastic to read about. She’s so delusional and living in her own made-up world that you feel it’s already a lost battle if you were to be put on the chair yourself. The situation is despairing and the tension runs high. Thrilling and creepy in perfect measure!

I’m not entirely sure how Lucy knew which women gave up their child for adoption, or what really happened in her own childhood to get her so derailed (although we get the gist that she wasn’t loved by anyone and was discarded several times in her young life), but it didn’t defer me from still totally loving this book.

Ruby Preston is a wonderful character. She’s described as being a real woman and she comes across as tough while still wearing her heels. She’s a veritably three-dimensional character and I liked discovering all these different facets about her. She is devoted to the law and bringing people to justice but is not afraid to cross the line if she thinks it mandatory. Unknown to most of her colleagues are her ties to the Crosby family, a famous family of criminals who happened to be living next door when she was a child. There’s the attraction to Nathan Crosby but the impossible reality of them being together, even though he’s wanting to leave his old life behind. His brother Lenny however won’t let him walk away so easily. He’s just got out of prison and he’s all kinds of dangerous, also to Ruby.

There are a lot of balls in the air in this novel, which makes the story fast-paced and extremely interesting. There’s so much going on and I just love the complexity, its depth and the cliffhangers which set your mind to work and keep you on your toes the whole time. It also seems the past might be catching up with Ruby and could be connected to the present murders by the doorknock-killer. How long is Ruby going to keep her suspicions to herself? Will she get to Lucy before the last victim will be killed and will she have to sell her soul in order to find out the truth?

The cover isn’t lying at all this time, the plot reaches a perfect climax in the end with a very unexpected windup. I’m already fond of Ruby and I would love to see her back in the next instalment of the series. This is a new detective and series that is really worth discovering and I highly recommend it for fans of detective series !

I received a free copy of this book from the author and publicist in exchange for my honest opinion.

Check out the other stops on this Book Tour: 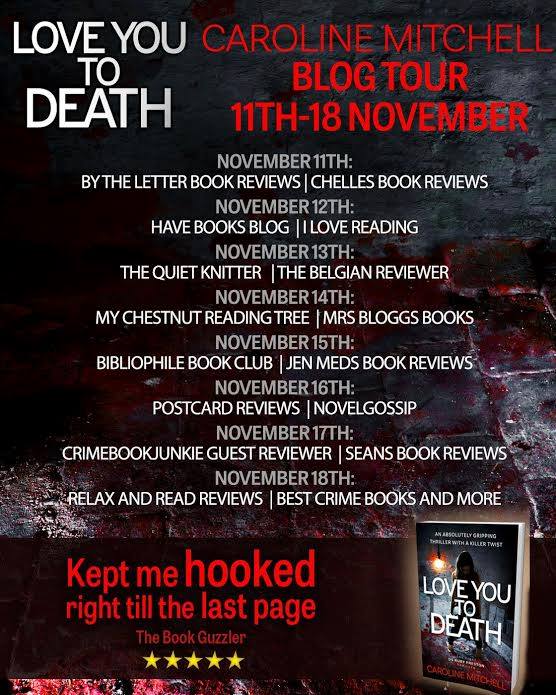