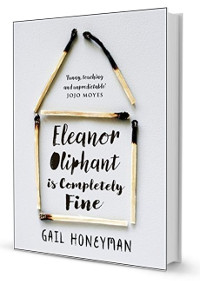 Eleanor Oliphant leads a simple life. She wears the same clothes to work every day, eats the same meal deal for lunch every day and buys the same two bottles of vodka to drink every weekend. Eleanor Oliphant is happy. Nothing is missing from her carefully timetabled life. Except, sometimes, everything.

One simple act of kindness is about to shatter the walls Eleanor has built around herself. Now she must learn how to navigate the world that everyone else seems to take for granted – while searching for the courage to face the dark corners she’s avoided all her life.

I knew it, I knew it, I just knew I was going to love this one. I was drawn to this novel like a moth to a flame. This was a story that I really wanted to discover myself when I saw the reviews and I already had a feeling this was going to be an exceptional read before I even read the first page. Call it intuition, ok call it luck then, but I was right anyway, I was well and truly hooked by the story. It’s going to be impossible to keep this review short, I just have so much to ramble about. I’m not even sorry :-).

I don’t know if Eleanor Oliphant’s surname was chosen with this in mind or was just meant to be quirky in analogy with Eleanor’s character, but in Dutch we have a saying about people acting like a bull in a China Shop, only the animal used in Dutch is in fact an elephant. That is exactly how I was thinking about Eleanor as well and why I think her name fit her so well. She’s so otherworldly, her world is structured and timed and she doesn’t have a filter to what she’s saying, she’s so socially inept. It’s funny sometimes, painful at other times. It really helped to cement my warm feelings and sympathies for her and I even started to think she might very well be on the autism spectrum. I felt a strange kinship and saw a piece of me in her too on some levels, it was easy to connect, even if she feels a bit bourgeois by the way that she’s talking. Her sentences were eloquent and sophisticated and there was a moment in the beginning that I was afraid I wouldn’t be able to enjoy this style, but I adapted and while it might not work for me in another novel, I felt her speech was in line with her character here as well, especially bearing in mind we are talking about a person who doesn’t even use abbreviations in e-mails and is unfamiliar with common social interaction.

She’s got everything under control but is she really? She buys vodka every weekend and talks to her house plant so I wasn’t sure about that. The only person who comes by is the social worker twice a year and the gas meter guy. She also talks to her mother on the phone one time every week. Her mother is ‘locked up’ somewhere and it’s clear that she’s an abusive person.

Sometimes you don’t know what you’re missing until it is there and that’s exactly what the author shows through the interactions with Raymond, a work colleague who doesn’t give up on her. When they come to the rescue when a pedestrian falls in the street, she agrees to meet him at the hospital and this is the start of plenty more interactions, slowly developing a friendship and broadening her small world. It was great to see her grow and discover the world like this, seeing the world through Eleanor’s eyes was so fascinating. That is really the word that captures her character perfectly, Eleanor was utterly fascinating to follow.

Gail Honeyman put so much effort into Eleanor’s character, she’s so defined and so true and honest, that my heart really went out for her. Eleanor gives herself a little make-over and her shenanigans were quite endearing to read but she doesn’t only get a make-over on the outside. Eleanor’s world shifted when she met Raymond and she grows stronger every day. This novel is a heart-warming story, funny and sad because yes there is a tragic backstory that ‘ll move you without a doubt. A story about coming to terms with the past and moving on.

I can’t believe this is a debut novel really. The beautiful cover, the perfect title, the brilliant writing, it all just works together in the best way possible. Apart from the warning that the author wrote half of the novel in a literary style which took some getting used to, there’s absolutely nothing you won’t like about this novel.

Many many thanks to my wonderful blog friend Anne for sending me her proof paperback copy. This is my honest opinion.