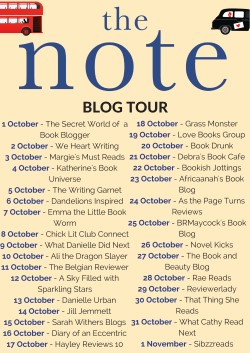 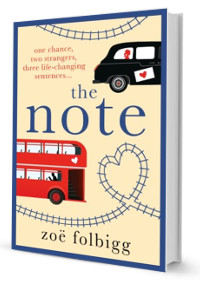 As featured on ITV’s ‘This Morning’…

Based on Zoë Folbigg’s true story comes an unforgettable romance about how a little note can change everything… One very ordinary day, Maya Flowers sees a new commuter board her train to London, and suddenly the day isn’t ordinary at all. Maya knows immediately and irrevocably, that he is The One. But the beautiful man on the train always has his head in a book and never seems to notice Maya sitting just down the carriage from him every day. Eventually, though, inspired by a very wise friend, Maya plucks up the courage to give the stranger a note asking him out for a drink. Afterall, what’s the worst that can happen? And so begins a story of sliding doors, missed opportunities and finding happiness where you least expect it.

The Note is an uplifting, life-affirming reminder that taking a chance can change everything… 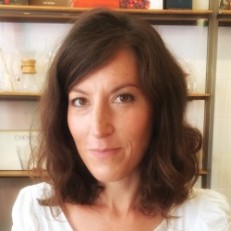 Zoë Folbigg is a magazine journalist and digital editor, starting at Cosmopolitan in 2001 and since freelancing for titles including Glamour, Fabulous, Daily Mail, Healthy, LOOK, Top Santé, Mother & Baby, ELLE, Sunday Times Style, and Style.com. In 2008 she had a weekly column in Fabulous magazine documenting her year-long round-the-world trip with ‘Train Man’ – a man she had met on her daily commute. She has since married Train Man and lives in Hertfordshire with him and their two young sons. This is her debut novel.

What inspired me? Me!

They say everyone has a book in them, and for me I didn’t have to look far for inspiration, because people kept telling me that the story of how I met my husband sounded like a novel.

It all started on a dreary and drizzly July morning, at my local train station. I was waiting for the 8.21am train to King’s Cross when a handsome stranger walked past me, heading up the platform. He wasn’t looking around, he wasn’t looking to fall in love: he was fixated on getting the train, nervous about starting a new job. I looked up and saw he was unlike any of the other commuters I was used to seeing every day. He was beautiful with wide, lovely eyes, and he looked like he had a good soul. I’m not sure how you can tell something like that about a person in a quick glance, but I knew. Suddenly everything in the world seemed right, and I gently edged up the platform towards this glorious new Train Person.

Train Person turned into Train Man. At work, I’d talk about him to my colleagues; they’d ask me if I’d spoken to him yet. But I could never engage in conversation with him in the grumpy gridlock of a morning commuter carriage. This went on for almost a year, until a friend looked at me in exasperation and asked: “What’s the worst that can happen?”

And so I wrote a note – the note – three sentences and a friendly sign-off, asking Train Man if he’d like to go for a drink. After a few days with the note burning a hole in my pocket I eventually plucked up the courage to give it to Train Man, and he emailed me later that day to say thank you, but unfortunately he had a girlfriend.

I was gutted – but carried on commuting as normal. He always lost in a book; me with my face buried in a book or magazine out of embarrassment.

Eight months later Train Man – Mark – emailed me on a Friday afternoon to say his circumstances had changed, and would I still fancy that drink? We met at a local pub that Saturday night, and from the Monday we started commuting together. We’re now married with two boys.

A few years ago, I wrote about my experience in a magazine, and the response I had was amazing. I received emails from people all over the world saying my little act of bravery had touched them, and made them want to do something brave too. That galvanized me to sit down and turn my story into a novel.

In my book, Maya sees James on a humid July morning and feels those same feelings I did, and so ensues a story of sliding doors and missed opportunities. Although the path to true love doesn’t run quite smoothly for Maya.

It was strange fictionalising my story. It needed to be juicier: my job on a teen magazine was great fun but Maya’s working world had to be even funnier; the characters more extreme, and writing her colourful colleagues was great. But sometimes I’d feel self-conscious: if wrote that Maya was beautiful, would people think I was saying it about myself? It was easy to describe James though. All those feelings I first felt were easy to put down for my leading man.

So here it is. A work of fiction based on something very real. I’m obviously glad I plucked up the courage to give Mark the note, and I’m so glad I took the plunge to ride the rollercoaster of writing, editing, and knocking on doors to get The Note published.

Self-limiting beliefs almost stopped me from doing both things, but like Velma, the sage septuagenarian friend to Maya’s more cautious twentysomething, says: “What’s the worst that can happen?” And I couldn’t shake them from my head.

I hope you enjoy The Note and find it as heartwarming and authentic as I intended.

Check out the other tour stops too! Next up tomorrow: A Sky Filled With Sparkling Stars

11 thoughts on “The Note by Zoe Folbigg #BlogTour #Guestpost”