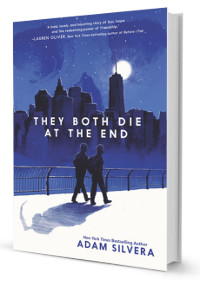 On September 5, a little after midnight, Death-Cast calls Mateo Torrez and Rufus Emeterio to give them some bad news: They’re going to die today.

Mateo and Rufus are total strangers, but, for different reasons, they’re both looking to make a new friend on their End Day. The good news: There’s an app for that. It’s called the Last Friend, and through it, Rufus and Mateo are about to meet up for one last great adventure and to live a lifetime in a single day.

Well we both know how this book will end, no surprises there :-). If you’re looking for an epic ending and a long drawn-out moment of feelings of loss and grief, then you won’t find it here though. They Both Die at the End is definitely more about the journey and the message the author is trying to convey than how they meet their end, even if it’s something I couldn’t help but to feel curious about. The author was clever enough to create some moments in the novel that could be pivotal to their destiny and were potentially dangerous. Who would go first? Or would they die together? My heart rate increased a few times only to come to the conclusion it wasn’t their time yet.

In this alternate reality Silvera created in this novel for the year 2017 there is no explanation why a 17 year old and an 18 year old were chosen to die and fortunately they don’t dwell on it either, both are just trying to make the best of their last day, their End Day. I don’t know how the Death-Cast stystem works, only that it does so flawlessly and it delivers the message through a call (and a confirmation by email) a little after midnight that your time on earth is coming to an end. I wished the why and how was a little more explained, like why they call people who’ll die that day are called Deckers, but I chose not to dwell on it either and it didn’t really work against the story so it was okay that some things were left a mystery.

Mateo and Rufus were complementary characters but also opposites and you know what they say about opposites, right? I guess that’s why they just clicked. Mateo is a quiet boy, he doesn’t have many friends and no social life to speak of, he likes it ‘safe’. For his End Day  he wants someone to help him have a great last day though and Rufus, or Roof as his friends call him, is perfect for making him break out of his sheltered life. He’s a bit of a trouble-maker, impulsive and extravert but he’s got a golden heart really. They start out as two total strangers – scared to meet even because the other one could just as well be a a killer end their End Day could be over real soon – but they become closer and closer as their time runs out.

This novel is a bit morbid but in a good way. They Both Die at the End really talks about death all through the novel. I expected ‘their shannanigans of the day’ to take over and push their destination to the background a bit but that wasn’t the case, it’s not hidden in a little corner and the story doesn’t let you forget any given moment but even so, it never gets depressing.

I admire Silvera’s intention to deliver a heartfelt message about seizing the day and making every moment count. The novel is certainly thought-provoking, it’s sad but I had a few laughs as well. It’s surprisingly light, even if there’s no escaping reality.

This was an enjoyable novel but it wasn’t as deep and emotive as I needed it to be. I didn’t cry, I didn’t sob in the end even though I felt something for the characters, it just wasn’t as heart-wrenching as I thought it would be. I got the message loud and clear though.. I’m so much like Mateo and I’m going to need a Rufus 🙂