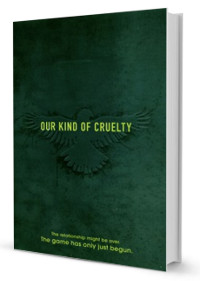 Mike Hayes fought his way out of a brutal childhood and into a quiet, if lonely life, before he met Verity Metcalf. V taught him about love, and in return, Mike has dedicated his life to making her happy. He’s found the perfect home, the perfect job, he’s sculpted himself into the physical ideal V has always wanted. He knows they’ll be blissfully happy together.

It’s all just part of the secret game they used to play. If Mike watches V closely, he’ll see the signs. If he keeps track of her every move he’ll know just when to come to her rescue…

A spellbinding, darkly twisted novel about desire and obsession, and the complicated lines between truth and perception, Our Kind of Cruelty introduces Araminta Hall, a chilling new voice in psychological suspense.

It’s not a lie, this is a love story but I can’t even start to describe how disturbingly obsessed this guy is. Mike, Mikey… dude… how delusional can you possibly be? Tell any sane person that someone is marrying someone else and it’s only with a game in mind and I don’t have to tell you what the reaction will be… and yet Mike’s mindset is presented so believably I accepted his delusions and prepared myself to ride his wave.

There are mitigating circumstances though as Mike’s poor childhood left him with a serious lack of emotional intelligence. He has little empathy for others, the only exception being V. She found him and he became devoted to her, he still is. His whole world is dominated by V. He’s constantly sharing what her preferences are, her type of house, her opinions on music, TV programmes, the colors she’d put on the walls, yet she’s nowhere to be seen. While’s she’s mostly absent from the story in physical appearance, she’s very present at the same time as well. It’s unhealthy, I don’t have to tell you, but I had no choice but to step in line with him and try to accept what he’s thinking and feeling, and I totally did. He was so into character. Nobody understands V. like he does and vice versa, he would do anything for her and if she wants to play this game, he’ll play along. I knew he saw things the way he wanted so they fit right into his preferred scenario and it was quite fascinating to witness how far he was taking this belief. Or is it more than that?

There is one big pivotal moment in the story and it got even better from hereon, because from here we are trying to find the answer to that overpowering question who is to blame for everything gone wrong. Was he led on by V. at all or was he the only one to blame? Things have gotten so out of hand you see and those court scenes were absolutely the best because I had no idea what I was going to hear. For the first time I was going to hear from someone else than Mike’s POV and I really craved some reason by then.

The keyword and the core of this story is definitely about responsability. Is he a victim of manipulation or not? Obsessed or Deceived? The truth was gradually revealed as the courtcase progressed and it confirmed my own findings. I can’t tell you my verdict as it would spoil it all but it certainly was a great character. Our Kind Of Cruelty is not a thriller in the traditional sense with a lot of thrills and chills but it is certainly chiling enough to read what goes on in the main character’s head. In the end it raises questions, it makes you wonder and think about it some more… even after you close the book. If you liked Good Me Bad Me by Ali Land then you’ll enjoy reading this novel as well!

I received a free copy of this novel from the publisher in exchange for my honest opinion.

36 thoughts on “Our Kind of Cruelty by Araminta Hall #BookReview”