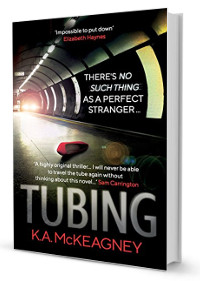 I am thrilled to be today’s stop on the blog tour for Tubing written by K.A. McKeagney. Many thanks to RedDoor Publishing for inviting me onto the tour.

Polly, 28, lives in London with her ‘perfect-on-paper’ boyfriend. She works a dead-end job on a free London paper. . . life as she knows it is dull. But her banal existence is turned upside down late one drunken night on her way home, after a chance encounter with a man on a packed tube train. The chemistry between them is electric and on impulse, they kiss, giving in to their carnal desires. But it’s over in an instant, and Polly is left shell-shocked as he walks away without even telling her his name.

Now obsessed with this beautiful stranger, Polly begins a frantic online search, and finally discovers more about tubing, an underground phenomenon in which total strangers set up illicit, silent, sexual meetings on busy commuter tube trains. In the process, she manages to track him down and he slowly lures her into his murky world, setting up encounters with different men via Twitter.

At first she thinks she can keep it separate from the rest of her life, but things soon spiral out of control.

By chance she spots him on a packed tube train with a young, pretty blonde. Seething with jealousy, she watches them together. But something isn’t right and a horrific turn of events makes Polly realise not only how foolish she has been, but how much danger she is in…

Can she get out before it’s too late?

K.A. McKeagney studied psychology in Bristol before completing a Masters degree in creative writing at Brunel. She won the Curtis Brown prize for her dissertation, which formed the basis of her first novel Tubing. She has worked in London as a health editor writing consumer information as well as for medical journals. Her writing has been commended by the British Medical Association (BMA) patient information awards.

She is currently working on her second novel.

I’m aware of the existence of the Mile High Club but Tubing turns the thrill of a sexual encounter up a few notches and promises even more excitement.

The term Tubing didn’t ring any bells so now I have a new additon to my vocabulary. Of course I Googled it, you’ll be hard pressed not to after you’ve read this novel, but Polly didn’t find anything either via the usual canals so I have to praise the author for creating this clever mystery. Is it real? Does it exist? Did she invent something new? Is it going to be on trend in 10 years?

I really like the whole concept of the novel and it really made this novel so special for a big part. It really is a great incentive to want to read this novel although I have to admit that I thought it would be more thriller and mystery than erotica, where the latter part would be used only as a prop. I certainly was a bit off the mark there though. The first half of the novel is actually pretty laced with Polly’s many sexual encounters. They didn’t really turn me on, instead I couldn’t help having mostly practical thoughts during those scenes. How come nobody takes any notice? I’m sure it can’t be (or become) a reality here where everybody is always looking at what the others are doing. So yes I had to suspend some belief there, sure, but I tried to go with the flow and although I cannot condone Polly’s behaviour with random strangers, I understood why she couldn’t and wouldn’t stop. As long as you’re not caught, you’ll only crave more, more tension, more danger, a bit of spicing up of her dull life. Only, she’s getting a little bit too obsessed with one of those strangers she meets.

The second part of the novel was absolutely my favorite part and was more rewarding for the thriller lover in me. Polly caught on that she’s playing a dangerous game and the tension and danger that was already there from the start take on another and even more unsettling form. As always, secrets and lies form the base of a wonderful twist in the story and I couldn’t keep the glee from spreading on my face when I read how this was going to be played.. roles are reversed and although I wasn’t her biggest fan the ugly truth made me suddenly feel a pang of sympathy for Polly.

If you’re not shy of some erotica in a menacing settting then this is definitely a novel worth exploring.

I received a free copy of this novel from the publisher, RedDoorPublishing, in exchange for my honest opinion. 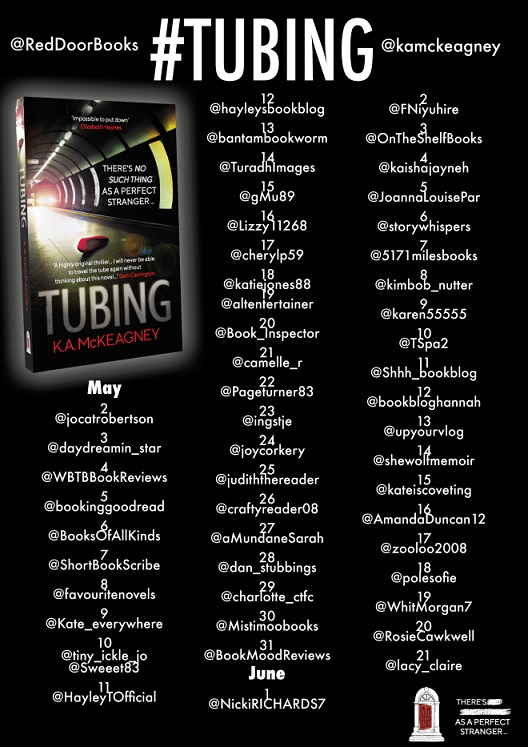