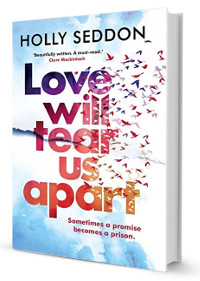 Fearing eternal singledom, childhood friends Kate and Paul make the age-old vow that if they don’t find love by thirty, they will marry each other.

Years later, with the deadline of their 30th birthdays approaching, the unlikely couple decide to keep their teenage promise. After all, they are such good friends. Surely that’s enough to make a marriage?

Now, on the eve of their 10th wedding anniversary, they will discover that love between men and women is more complex, and more precarious, than they could ever have imagined.

As Kate struggles with a secret that reaches far into their past, will the couple’s vow become the very thing that threatens their future?

Love Will Tear Us Apart is a novel that has its entire focus on Kate, Paul, their children and their own parents.

It’s a novel built up with time shifts, starting with the moment Kate and Paul met at the tender age of 13 up and up to now, celebrating their 10 year wedding anniversary. Well, there’s not really a festive mood and it seems all is related to a mysterious letter Kate found.

I would call this novel a descriptive family saga. I can’t say this was a love story… I wondered more than once where the love was. I didn’t really feel it from Kate’s side, at any given moment in her life which made me feel sad in her place. I didn’t see any tell-tale signs between Kate and Paul, any tentative gestures or touching by accident, nothing like that and I knew they were good together as friends but I wondered when love would change them.

I actually really liked everything about the mystery in the novel but I wasn’t really waiting to hear every single thing that happened in Kate’s life. I enjoyed reading how they became friends and how their friendship developed in the beginning of the novel, and I loved Viv, Paul’s mother who took Kate into her house and treated her like she was her own daughter. But as the novel went along it became a bit tedious having to read everything that followed and happened in her life, from her first steps into university, her first job and everything that came with it, her life felt rather depressing and I felt the focus was off.

I was more interested in that moment where they – childhood friends – finally fell in love, how they got to this point  and especially what was in the letter which was brought up so many times. There was A LOT of build up to finding out what was in that letter! Some readers had expected more of it but it didn’t disappoint me, it was a good secret. Will they stay together or not after the contents of the letter are revealed though? Will love rule after all? My lips are sealed :-).

I was happy I got to read this novel through receiving daily staves. It really helped me to stay curious and not rush through the novel to get to the ending more quickly. I’d recommend this novel to readers who like to hear the life-story of their characters and truly enjoy reading family sagas.

I received a copy of this novel via The Pigeonhole. This is my honest opinion.