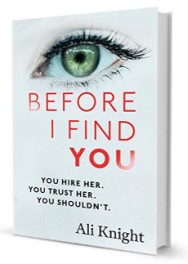 Maggie is a husband watcher. A snooper, a marriage doctor, a killer of happy-ever-afters. She runs her own private detective agency specialising in catching out those who cheat. And she’s very good at it. Until Helene walks through her door.

Helene is a husband catcher. A beautiful wife, a doting stepmother, a dazzling presence at parties. She counts herself lucky to have married one of the most eligible men in town – Gabe Moreau. Until she sees something that threatens her little family of three.

Alice is a perfect daughter. Apple of her father’s eye, a kind stepchild to Helene, a tragic daughter of a dead mother. She lives a sheltered but happy life. Until she finds a handwritten note on her father’s desk: ‘You owe me. I’m not going away.’

All three women suspect Gabe Moreau of keeping secrets and telling lies. But not one of them suspects that the truth could result in murder . . .

I was lucky enough to read Before I Find You via the Pigeonhole app installed on my tablet, so I received one stave each day over a course of ten days.

Before I Find You is a story dominated by women, very strong women to be exact.  I can’t say I felt much sympathy for any of them, unfortunately. Helene, the woman who suspects her husband Gabe of cheating, was too snubby and composed for me to like her. I hate to say it because there really shouldn’t be any excuse but in a way I could even see why her husband might have done what she suspects him of. Alice, the daughter, is a spoilt little brat who I wouldn’t want in my house and who happens to be smart beyond her years. I knew not to underestimate her. As for Maggie, the PI, who I would have expected to like and love, well she didn’t seem like a bad person but even she’s quite rude and standoffish. I also knew she was hiding something about her past so that didn’t make her very trustworthy either.

Aside from the characters, the storyline was quite good and kept me on my toes. The start of the story was a bit of a slow burner but it really kicks into higher gear when the murder happens. I quickly became engrossed and hooked from there. I didn’t know who to put my money on from thereon and if I thought it would end here, well no no.. the author had a brilliant twist up her sleeve that really lifted the story up to a higher level. I very much enjoyed the last part of the novel and I’d give it 4 stars easily for the ‘where the hell did that came from’ plot but I’m afraid the characters influenced my rating in this case more than I wanted. It’s still a good read though so I’m sure to keep an eye out for another one of her novels.

I received a free copy of this novel from the publisher via The Pigeonhole. This is my honest opinion.

21 thoughts on “Before I Find You by Ali Knight #BookReview”