Welcome to my blog stop on the book tour for The Woman Inside by writer duo E.G. Scott. My thanks to the authors, to Tracy Fenton and publisher Orion Books for the opportunity to be part of the tour. I can’t wait to tell you more so let’s go!

Rebecca didn’t know love was possible until she met Paul, a successful, charismatic, married man with a past as dark as her own. Their pain drew them together with an irresistible magnetism; they sensed that they were each other’s ideal (and perhaps only) match.

But twenty years later, Paul and Rebecca are drowning as the damage and secrets that ignited their love begin to consume their marriage. Paul is cheating on Rebecca, and his affair gets messy fast. His mistress is stalking them with growing audacity when Rebecca discovers Paul’s elaborate plan to build a new life without her. And though Rebecca is spiraling into an opiate addiction, it doesn’t stop her from coming up with a devious plot of her own, and this one could end absolutely everything.

What follows is an unpredictable and stylish game of cat and mouse—a shocking tale of unfaithfulness and unreliability that will keep you racing until the final twist and make you wonder how well you really know your spouse.

The Woman Inside is a domestic thriller where thrilling secrets and lies suddenly wreak havoc to a solid marriage of 20 years.

The novel pulled me in right away. The intrigue and secret-keeping is set in motion from the very first chapters when Rebecca decides to get away and comes to the shocking conclusion that their little pot of money (well not so little anymore after 20 years of saving by both of them) is allmost all but gone. They saved and saved to build their dream home, they were even keeping pace who could raise the month’s highest amount, and now dear husband Paul has cleaned out the account and thinks she hasn’t seen it. Does she confront him? Noooo of course not, that would spoil all the fun!

The story is told in alternative voices by Rebecca and Paul. She’s popping pills like you’ve never seen before and he’s a cheater, so who’s the most unreliable one in this story? Tough choice! I enjoyed getting to know these beautifully flawed characters. Who to side on though? Poor Rebecca who is all but cleaned out and suspects that Paul is preparing to go off with a mistress? It felt right at first but then I started to feel more cautious and doubt crept in whether it’s all as straightforward as it seemed. As I learned both characters had secrets to protect I had a change of heart who the ‘better person’ was a couple of times and that was before a third person gets into the mix, someone who might turn out to be as crazy – or even crazier – than the other two. They’re all on an equal footing here so I was pretty excited to discover who would come out on top and let me just tell you in advance it wasn’t who I thought it would be.

There were plenty of twists and turns, some you expect but at least one I can guarantee you can’t see coming in a million years. It was kind of a crazy twist is all I want to say about it and I’ll let you be as dumbfounded as I was 😃 I really enjoyed how the novel was wrapped up. After all that happened I still felt quite sad for Rebecca and Paul, but the ending was quite fitting.

E.G. Scott is a synonym for two authors and I think their collaboration worked perfectly in this novel because I had no idea Elizabeth and Gregg wrote this unpredictable story together.

I received a free copy from the publisher via Netgalley in exchange for my honest opinion. 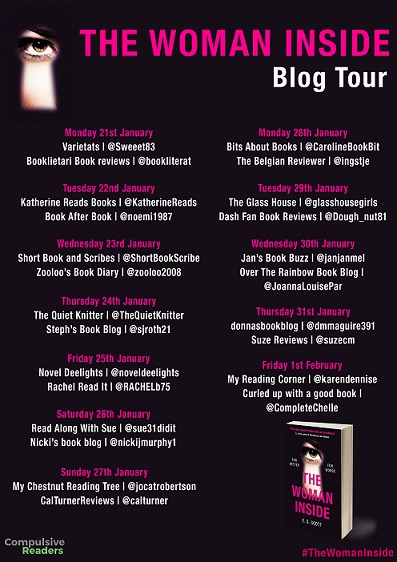 29 thoughts on “The Woman Inside by E.G. Scott #BlogTour #BookReview”