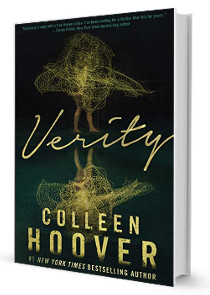 Lowen Ashleigh is a struggling writer on the brink of financial ruin when she accepts the job offer of a lifetime. Jeremy Crawford, husband of bestselling author Verity Crawford, has hired Lowen to complete the remaining books in a successful series his injured wife is unable to finish.

Lowen arrives at the Crawford home, ready to sort through years of Verity’s notes and outlines, hoping to find enough material to get her started. What Lowen doesn’t expect to uncover in the chaotic office is an unfinished autobiography Verity never intended for anyone to read. Page after page of bone-chilling admissions, including Verity’s recollection of the night their family was forever altered.

Lowen decides to keep the manuscript hidden from Jeremy, knowing its contents would devastate the already grieving father. But as Lowen’s feelings for Jeremy begin to intensify, she recognizes all the ways she could benefit if he were to read his wife’s words. After all, no matter how devoted Jeremy is to his injured wife, a truth this horrifying would make it impossible for him to continue to love her.

I wanted to read this novel as soon as I heard about it. I’m a longtime fan of Colleen Hoover’s romance books and I happen to be quite a bit of a thriller lover too so this combination of my fav author writing a suspenseful novel was all I needed to hear!

This might be her first novel in the suspense genre but she obviously doesn’t look at the world hearty-eyed all the time and has a pretty wicked mind as well. It was much darker than I expected and I really appreciate that she didn’t hold back at all just to appease some of her readers who aren’t used to this.

While Lowen is staying at the Crawford residence where she’s meant to finish Verity’s manuscript, a woman who became paralysed after an accident, she stumbles upon a manuscript. Intermittent to Lowen’s presence at the house are chapters of this manuscript which slowly reveal a pretty disturbing secret.

It might be an upsetting topic for some readers but it’s CoHo’s trademark to make you feel emotional and I can say that I did feel very strongly about Verity, her actions seriously made my toes curl. Lowen is feeling increasingly disgusted and so was I. Should she tell Jeremy the truth about his wife or not though, that’s quite the dilemma.

At the same time it wouldn’t be a CoHo novel if there wouldn’t be a bit of romance in it as well although I really wouldn’t catalogue this novel in or even near the romance genre. There’s a lot of attraction and it was addicting to read the interactions between Lowen and Jeremy. There were a few too many graphic scenes in the novel for me if I’m being honest, be it with Lowen or the scenes in the manuscript with Verity, but in the end it seems that they kind of served a purpose so that makes me more forgiving :-).

The ending is absolutely worth mentioning the most! It’s one of those endings that I’ll remember in every detail even in 5 years of time. I saw one part of it coming and I felt myself already quite clever but I had no idea there was more! There was another part and it caught me completely off guard. I was quite stunned by this development to say the least. I don’t know if everyone will agree with me and will like hearing so but there’s plenty of room to question the ending and to decide on what you think has happened. It is designed to make up your own mind and I quite liked it.

I thoroughly enjoyed reading Verity, the plot was clever, the novel was quite sinister and played with my mind. I truly hope she writes more novels in the genre!

I bought an ecopy of this novel. This is my honest opinion.