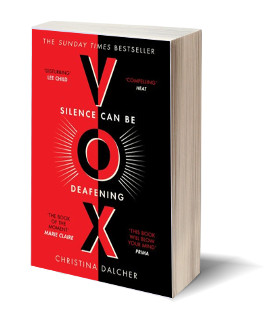 Silence can be deafening.

Jean McClellan spends her time in almost complete silence, limited to just one hundred words a day. Any more, and a thousand volts of electricity will course through her veins.

Now the new government is in power, everything has changed. But only if you’re a woman.

Almost overnight, bank accounts are frozen, passports are taken away and seventy million women lose their jobs. Even more terrifyingly, young girls are no longer taught to read or write.

For herself, her daughter, and for every woman silenced, Jean will reclaim her voice. This is only the beginning…

This book! Have you read it? Well if not, why haven’t you? It’s an incredible novel and it feels so friggin’ real (well for the most part but I’ll get to that later); it is actually a super scary thought that this world Jean lives in is something that could actually happen.

From p. 370: “The only thing necessary for triumph of evil is for good men to do nothing.”

The novel made me think a lot about the world I’m actually a part of and about this fictional one and I couldn’t believe how easy they made it sound to change the world in such a small amount of time. Even without any dead bodies (okay, maybe a few), it really got under my skin.

I was planning to not do this but it’s just inevitable, so yes I’ll have to bring up The Handmaid’s Tale. Vox is set in its own frightening world: one where women are not ‘surrogates working as servants’ no they can stay with their own family, if they’re married, but they really don’t have to talk too much. Shut your mouth is to be taken pretty literally in this novel. At least in Atwood’s novel the women could talk on stolen moments, there was solidarity and friendship. The world building in Vox (‘Vox’ being the Latin word for Voice) is very different even if the domination of women is the main goal in both novels. Women and girls can’t talk, or barely. What’s a hundred words? It means no bedtime stories to your children, it means not replying even when you know the other person is wrong or lying… Take away someone’s voice, take away the communication (reading, writing, nor signing is allowed either of course) and you isolate people, you make them docile. Those first two chapters really came in and I felt for Jean instantly.

Jean (or Gianna, both names are used because she’s Italian) isn’t just anybody though, she’s a linguist who did ground-breaking work in the field of brain repair. Now they suddenly come to her because they need her help. She doesn’t want to help but there are some incentives. I loved the dilemma’s she faced throughout the novel and one of the biggest was whether she would choose to stay or flee the country, leaving her family behind if it ever came to it. It might seem like an easy choice but it really wasn’t.

One of the most poignant storylines were the conversations she has with her daughter Sonia and her son Steven. Steven, aged 17, was subtly influenced through school and it was so disheartening and frustrating to hear him change. It was equally heart-breaking to hear how proud Sonia was of her achievement and how she is used to this reality. The world is all wrong and they’re too young to get it.

OK so the novel was brilliant, I’m sure you get it by now BUT the second part of the novel was the part with the blazing guns and the action so to speak. At one point towards the ending the author must have thought let’s crank it up a notch and see how crazy we can really make it. The whole thing with the monkey and that other dude was a bit nuts and I wasn’t really sure what the purpose was to be frank, I wanted to shout at them for being so dumb.

Honestly, I loved the concept and this was such a chilling and thought-provoking novel, a very impressive debut. Oh and lest you not forget: ‘We will not be silenced‘, damn right :-)! This review consists of 608 words and I’m not taking any of them back.

I received a free copy of this novel from the publisher, HQ publishing, in exchange for my honest opinion.