Welcome to my stop for One Year Later by Sanjida Kay. Thanks so much to Corvus and Anne Cater of Random Things Tours for the invitation to join this blog tour! I absolutely enjoyed  The Stolen Child in the past and this novel is definitely on my readlist too. You’ll have to be a bit patient but it’s a delight that I can already share an extract today. But before you read it, check out how wonderful this novel sounds first:

Since Amy’s daughter, Ruby-May, died in a terrible accident, her family have been beset by grief. One year later, the family decide to go on holiday to mend their wounds. An idyllic island in Italy seems the perfect place for them to heal and repair their relationships with one another.

But no sooner have they arrived than they discover nothing on this remote island is quite as it seems. And with the anniversary of the little girl’s death looming, it becomes clear that at least one person in the family is hiding a shocking secret. As things start to go rapidly wrong, Amy begins to question whether everyone will make it home… 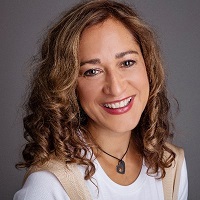 Sanjida Kay is a writer and broadcaster. She lives in Somerset with her daughter and husband. She has written three previous psychological thrillers, Bone by Bone, The Stolen Child and My Mother’s Secret to critical acclaim.

He stands on the edge of the cliff and stares at the drop below. It’s early, around 5 a.m., and he’s only had two hours’ sleep.

He blinks, rubs his eyes. The wind, skimmed straight from the sea, is cold, and he can taste the salt on his tongue. There’s a pale-blue line where the ocean meets the sky: the first sign of the approaching dawn. He has a torch in his pocket, but it’s of little use, faced with the dark expanse of beach below him. He shifts slightly and feels the earth give way beneath one foot.

He doesn’t have long.

The tide is almost fully in, and the man who’d phoned him had said she was at one end of the beach. The caller was drunk; he said he was on his way home from the festival, although that in itself was suspicious, because no one lives at this end of the island, save for the Donati family and the people staying in the holiday house below their farm. The man was slurring his words – fear, combined with the alcohol, making him barely comprehensible. He didn’t say which end of the beach. Martelli had driven here as fast as he could, radioing for the ambulance from the car. He offers a silent prayer: that she is above the tideline, that he can find her in time, that she’s still alive. The clouds shift; the line of light over the water turns to buttermilk, and he thinks he can see her. Could be rocks or flotsam. Or a body. If it is the English girl, she’s lying stretched out on the sand below the headland, where this spit of land joins il cavalluccio marino.

He clicks the torch on and starts down the cliff path. It’s treacherous in daylight, never mind at night: narrow, twisting and steep, stones breaking through the soil. He slips, thinks he’s going to lose his footing. He can’t see how far it is to the bottom. He slides, collapses back against the side of the cliff, grabbing handfuls of vegetation to stop himself from falling the rest of the way. Loose grit and pebbles slide from beneath his boots, and he can smell the sweet, sharp scent of thyme and wild marjoram where he’s crushed the plants in his fists. It’s momentarily comforting: his grandma puts them in her rigatoni campagnolo. But then his torch hits a rock on the shore and the bulb smashes. He’s in darkness, his breath ragged in his throat. He pushes himself half-upright and scrambles the rest of the way down. His ankle throbs where he’s grazed it. The paramedics are not going to be able to carry her up here on a stretcher, he thinks, and the tide is approaching so fast, he’s not sure if they’ll make it round the headland, either.

He runs across the sand, through crisp, dried seaweed and a ragged line of plastic bottles, Coke cans scoured clean, baling twine and polystyrene chips. The tourists can’t reach this beach, so no one clears away the rubbish. She’s on her side, one arm flung out, her legs at a disjointed angle. Has she fallen from the cliff? The rocks surrounding her are sharp as needles, erupting through the sand like prehistoric teeth. The foam-tipped edge of a wave creeps across the toes of her right foot. She’s missing one sandal. Her white summer dress is rucked up, exposing her thighs, revealing part of one breast. He throws himself onto his knees next to her. Her dark hair is wet and covers her face, so he can’t see what she looks like – if she is the missing girl. But he can see the blood: an uneven pool staining the sand, spreading out from the back of her head.

Where the hell is the ambulance?

His radio crackles, but there’s no word from the paramedics. He gently touches her with the tips of his fingers, and she’s cold, so cold.

He’s never seen a dead body before and his stomach clenches into a tight fist. Briefly he brushes the crucifix hidden under his shirt and then slides his hand beneath her hair, feeling for a pulse.