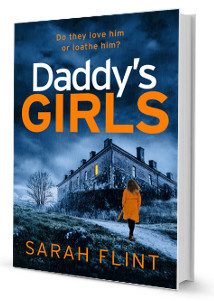 Welcome to my stop for Daddy’s Girls by Sarah Flint. Thanks so much to Aria Fiction for the invitation to join this blog tour! I have an extract to share with you today but first check out how wonderful this novel sounds.

He wasn’t always a killer. At first, he just wanted to talk.

D.C. Charlie Stafford has an odd case on her hands. And it may be her toughest one yet.

A burglar who isn’t interested in valuables, the subject of Operation Greystream is a strange but smooth operator. In the dead of the night, gloved and masked, he visits the elderly. He doesn’t hurt them and, if they beg, he won’t take anything of real value. All he wants is conversation… and they’re powerless to refuse him.

But then 87-year-old Florence Briarly is found by her friend, cold to the touch and neatly, too neatly, tucked into bed. And Charlie realises this case has taken a sinister, urgent turn. Now this stealthy burglar has had a taste of murder, it’s only a matter of time until he craves it again…

With a Metropolitan Police career spanning 35 years Sarah has spent her adulthood surrounded by victims, criminals and police officers. She continues to work and lives in London with her partner and has three older daughters.

It was dark when the man returned.

The man liked darkness. He liked the anonymity it provided. He had worked in darkness many times in the early years of his career and was at home in its obscurity. On one occasion, many years before, he had heard a politician being described on the TV as ‘having something of the night’ about him and the phrase had stuck in his head. It fitted him. It was him. There had always been something dark inside him that he had never been able to truly control. At times it had emerged, unbidden, but he had never been able to allow it free rein… until more recently.

He slipped into the bushes, retracing his previous route along the footpaths of the common until he came to a small, cramped spot of flattened foliage, right opposite the old woman’s house. It was perfect. In fact, the whole area was perfect. Streatham Common was a well-known location for the anonymous liaisons of gay men, so it was criss-crossed by walkways, some wide, some only lightly trodden, with small, circular patches where the shrubs had been compressed flat by the weekends’ illicit activities. Tonight, however, being a Monday, the common was quiet, as were the residential streets that bordered it, few cars other than those belonging to residents requiring access.

With gloved hands, the man carefully unfolded a square of waterproof sheeting, spread it out on top of the trodden leaves and crouched down on it, watching and listening at all times – but nothing stirred. Idly, he ran his fingers through his rucksack, double-checking that all his tools were in their correct places, cleaned and sharpened, ready to cut wires, score through putty, slip locks; if necessary keep control. He couldn’t risk making any mistakes. He was too good for that.

The old woman’s details were already seared into his memory. She was called Florence Briarly; he’d seen it on discarded correspondence. She was eighty-two years of age, subscribed to several charities and on the whole wasn’t taken in by junk mail, most being thrown away unopened. He knew all of this because he’d been there before, during daylight hours, as well as under cover of darkness, scoping out her house, checking the bins and memorising her night-time rituals.

She was a typical pensioner: she entertained only a handful of daytime visitors and spent evenings alone with just her TV for company. She got up at the same time every morning and she went to bed at the same time every night. She tended to shop and complete her chores in the mornings, took a short nap after lunch and entertained most visitors in the afternoon, before having tea at around 6 p.m. She chose not to drive, so if not being picked up would usually catch a bus. She did not appear to have a mobile phone and had little use for technology. A landline and TV were clearly all she needed, and that was all she had.

He allowed himself a smile of anticipation. She was perfect for what he wanted – and what he really wanted was conversation, a chance to get to know the real Florence Briarly. He loved the elderly. They held memories he loved to hear.

A light still shone from the downstairs window but soon it would begin its movement upwards, the meagre glow lighting her way up the stairs, onto the landing and into her bedroom. Old people were slaves to routine and Florence Briarly was no exception.

He checked his watch and made himself more comfortable, lying on the waterproof sheet and pulling the hood of his jacket tighter around his head, leaving only a small hole through which to peer. Even though the sun had been warm, now it was night, the chill dampness of the woodland seeped into his bones – but he didn’t care. He had spent many an hour rooted unmoving to a single spot in his youth. Doing so again only served to heighten the experience.

No blog tours this month