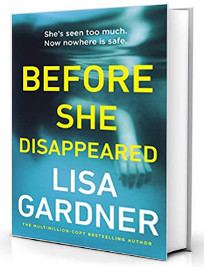 Welcome to my stop on the blog tour for Before She Disappeared by Lisa Gardner. I don’t do book tours often anymore so you should know it takes a special kind of book or author to make me sign up and I didn’t have to think long at all to say ‘yes please’ to read and review this one. Take a look at this great blurb and tell me you’re not intrigued a little yourself:

Frankie Elkin is an average middle-aged woman with more regrets than belongings who spends her life doing what no one else will: searching for missing people the world has stopped looking for. When the police have given up, when the public no longer remembers, when the media has never paid attention, Frankie starts looking.

A new case brings Frankie to Mattapan, a Boston neighborhood with a rough reputation. She is searching for Angelique Badeau, a Haitian teenager who vanished from her high school months earlier.

Resistance from the Boston PD and the victim’s wary family tells Frankie she’s on her own. And she soon learns she’s asking questions someone doesn’t want answered.

But Frankie will stop at nothing to discover the truth, even if it means the next person to go missing will be her …

The author found inspiration for this novel when she stumbled upon some forums where ordinary people are united and are willingly giving up a lot of their free time trying to crack cold cases. There are more people who are active and invested in the many unsolved cases than you might think. She embodies these people in Frankie Elkin, a woman with a mission. Frankie has been travelling all over the country for over 10 years, her only ambition finding missing persons, to give families an answer to that burning question where their loved one is. So far none of them was found alive but she keeps this not unimportant fact from the families. Her motivation for being such a loner, bringing only a rucksack and travelling with the same old sparse set of clothes remains unclear until the end but it is obvious what motivates her is linked to a person of her past, a man named Paul who is absent from her life now but who she still appears to love dearly.

Frankie Elkin is a flawed and troubled soul but one that I could fully get behind. She has more than one demon and aside from the one she’s hiding, she’s quite open and upfront about her battle with alcohol. She goes to AA meetings wherever she is staying and even after 9 years of staying sober she can’t say she has slayed this dragon completely. I loved that she wasn’t perfect and it made her even more sympathetic in my eyes.

So one case finished Frankie scours the net and travels to the multi-cultural city of Mattapan, Boston to find 15-year old Angelique (Angel for her friends) Badeau. While risking her own life not only in certain areas of the city where it is unwise to walk around as a white person let alone a single white female, but also by getting out of bed in the morning and meeting the wreath of a maniacal cat called Piper who she shares her room with, Frankie is not intimidated by either one. She roams the city asking questions, going properly old-skool with her investigation, and while she didn’t receive a warm welcome at first, she does gain trust here and there and with detective Lotham finally aboard the investigation is re-energized although there are only more questions rising after her first significant discovery of a puzzling clue. What was Angelique getting into, the case gets weirder by the minute and Frankie is not out of harm’s way herself. The author kept me well in the dark about what was going on and while my mind was going in overdrive I did love every minute of it. It was great discovering how she was able to disappear with so much CCTV all around, but finding out the reason why she disappeared was even better and also different from any missing persons novel I have read so far.

I totally understand why readers would love to see Frankie Elkin (and the pub’s loveable landlord Stoney, Piper and detective Lotham) again in a series but since I’m rubbish at following series I’m quite happy this was a standalone. I read two, three of Lisa Gardner’s novels before (which can be read as standalones too) and I’m also a big fan of detective D.D. Warren so it was never even a question whether I was going to like Before She Disappeared. This author never fails to deliver and I’d really love to read more stories as intriguing as this one! 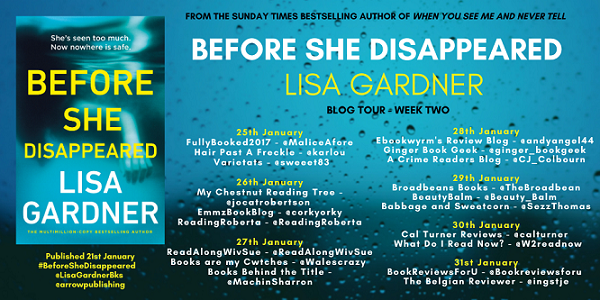 I received a free paperback copy of this novel from the publisher in exchange for my honest opinion.