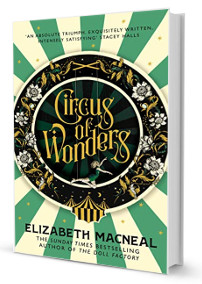 1866. In a coastal village in southern England, Nell picks violets for a living. Set apart by her community because of the birthmarks that speckle her skin, Nell’s world is her beloved brother and devotion to the sea.

But when Jasper Jupiter’s Circus of Wonders arrives in the village, Nell is kidnapped. Her father has sold her, promising Jasper Jupiter his very own leopard girl. It is the greatest betrayal of Nell’s life, but as her fame grows, and she finds friendship with the other performers and Jasper’s gentle brother Toby, she begins to wonder if joining the show is the best thing that has ever happened to her.

In London, newspapers describe Nell as the eighth wonder of the world. Figurines are cast in her image, and crowds rush to watch her soar through the air. But who gets to tell Nell’s story? What happens when her fame threatens to eclipse that of the showman who bought her? And as she falls in love with Toby, can he detach himself from his past and the terrible secret that binds him to his brother?

Elizabeth Macneal is a wonderful storyteller, don’t you agree? Her debut novel, The Doll Factory, was incredibly good (here’s my review) so I was more than a little excited to read Circus of Wonders. I was very happy Macneal chose for the Victorian era as the new setting of another book although I wasn’t sure how interested I would be in the circus life. Turns out I really fell for it, feeling as enraptured and close to the magic and the wondrous as if I was literally walking between the wagons at the site.

The exhibition of freaks, monstrosities or the so-called marvels of nature were essential components of travelling exhibitions in Europe and America throughout the Victorian period and Circus of Wonders shows all sides of this phenomenon in a story that moves the voices between Nell (the attraction of the show), Toby (the man who sees her for who she is) and Jasper (the man who wants to make Nell the star of his show).

Nell was an outcast in her village, but when she is forced to join Jasper Jupiter’s Circus of Wonders she soon discovers a community there where she is not regarded as a freak. In the company of a bearded woman, a giantess, and other ‘revels’ she finds a a sense of family and belonging. As a reader I was happy the story progressed so positively for Nell, although I knew this probably couldn’t last.

Nell is fast on her way to become the star of the show. Unfortunately Jasper is not satisfied yet and he wants to eclipse the famous P.T. Barnum and his attraction Tom Thumb. So what he wants is to perform for the Queen, he wants fame and fortune and he will do anything to get what he wants. I was anxiously reading about Jasper’s growing obsession to become the greatest showman of all time. Everything comes at a price of course. He makes a pact with a devil and now the pressure is sky high. There is tension and danger lurking in the shadows, which I loved. Will he achieve his goal or does he want to fly so close to the sun that – like Icarus – the wings will burn and he will tumble to the ground? It didn’t bode well…

Even though Nell is the star of the show/novel I liked her but I never really loved her character so I came to enjoy reading other parts of the book more as the story progressed. I found the whole setting highly interesting, how everyone was looked upon, what life entailed in the circus. I loved that real references were woven into the story and Macneal writes scenes so vividly that the era certainly comes alive. The two brothers Toby and Jasper fascinated me most of all and I also loved the mysterious plotline between them. There’s a story – a secret that originated during their time at the Crimean war – that overshadows their sibling relationship and makes it toxic, there’s jealousy and fear and the author keeps up the tension and mystery until the very end by leaving small crumbs all through the story.

I’m afraid to say that by the end of the novel I was less of a fan of Nell. She chooses her path in life when given two choices and I didn’t follow her in her dream and desires so the ending wasn’t entirely how I had envisioned it. Apart from that this is really another excellent immersive read by a historical writer I respect very highly!

I received a free copy of this novel from publisher Picador Books. This is still my honest opinion.

No blog tours this month