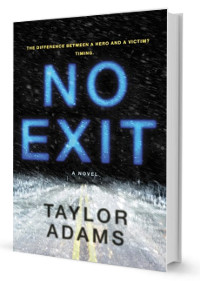 A kidnapped little girl locked in a stranger’s van. No help for miles. What would you do?

On her way to Utah to see her dying mother, college student Darby Thorne gets caught in a fierce blizzard in the mountains of Colorado. With the roads impassable, she’s forced to wait out the storm at a remote highway rest stop. Inside are some vending machines, a coffee maker, and four complete strangers.

Desperate to find a signal to call home, Darby goes back out into the storm . . . and makes a horrifying discovery. In the back of the van parked next to her car, a little girl is locked in an animal crate.

Who is the child? Why has she been taken? And how can Darby save her?

There is no cell phone reception, no telephone, and no way out. One of her fellow travelers is a kidnapper. But which one?

Trapped in an increasingly dangerous situation, with a child’s life and her own on the line, Darby must find a way to break the girl out of the van and escape.

But who can she trust?

My nails are bitten to the quick, I couldn’t stop myself! I usually don’t go for action-packed books but I’m so happy I gave this one a chance. I was more than a little addicted to No Exit and I even sacrificed a little bit of sleep for it and god knows I already don’t have have any to spare.

No Exit is incredibly twisty, gripping and full of suspense. I had it on my e-reader for a while so I didn’t really remember what it was about, all I knew was that it was a locked-in type of novel and that was good enough for me because I love those, so even the fact that Darby finds someone – a child no less – in the back of a van was the first surprise for me. I could have withheld this info here but I see that it’s even mentioned in the blurb and honestly you don’t need to worry that I just told you one of the best parts, it’s only the start of a jam packed novel with twists you won’t see coming at all. I loved how unpredictable and volatile the situation became. The novel is full of nervous tension and danger.

Darby needs to survive the night but with no cell signal she can’t alert the police so it’s all up to her to take action and my god she’s literally a heroine, I rooted so much for her. She’s not naive at all because if she was she would have been dead very early on. First she has to find out who abducted the girl, whose car it is without raising suspicion, and then she has to outwit this person and at least try to free the little girl or find a way to get the police there as soon as possible. With no reception at all that’s easier said than done. It’s a race against the clock before the roads open again and of course things don’t go as smoothly as they should! Safe to say that she”ll have to risk her own life more than once in the process.

Be aware that there’s some torture involved so it’s certainly not a novel for softies and even I felt the impact of some of the graphic scenes. Two particular scenes come to mind and one at least made me squirm when I pictured it in my mind (and it’s easier than you think because I’m sure you and me have felt that particular pain that was inflicted for a fraction in the past) but if you ask me if I’d change anything about it then I have to say I wouldn’t change anything at all!

I really didn’t expect to be so blown away but the thrills just kept on coming and I don’t know how many times I held my breath. I can’t wait to read the other novels this author has written so far!

I bought an ecopy of the novel and this is my honest opinion.

2 thoughts on “No Exit by Taylor Adams #BookReview”