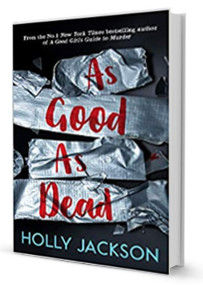 Pip Fitz-Amobi is haunted by the way her last investigation ended. Soon she’ll be leaving for Cambridge University but then another case finds her . . . and this time it’s all about Pip.

Pip is used to online death threats, but there’s one that catches her eye, someone who keeps asking: who will look for you when you’re the one who disappears? And it’s not just online. Pip has a stalker who knows where she lives. The police refuse to act and then Pip finds connections between her stalker and a local serial killer. The killer has been in prison for six years, but Pip suspects that the wrong man is behind bars. As the deadly game plays out, Pip realises that everything in Little Kilton is finally coming full circle. If Pip doesn’t find the answers, this time she will be the one who disappears . . .

The highly-anticipated finale to the A Good Girl’s Guide to Murder series, the instant bestsellers that read like your favorite true crime podcast or show. By the end of this mystery series, you’ll never think of good girls the same way again…

As Good As Dead is the third novel of a trilogy, with A Good Girl’s Guide to Murder (my review) and Good Girl, Bad Blood (my review) preceding this one. I read the first two novels so of course I had to find out how everything was going to end for Pip Fitz-Amobi. I wouldn’t recommend reading this last novel as a standalone because there were a lot of references to both of the previous novels. That being said, I read the first one quite some time ago and it was not so easy to remember everything that had happened to all the characters of the town for me either so I struggled a little understanding why Pip was feeling so much animosity towards some of them.

I enjoyed the majority of the story of As Good As Dead, but it wasn’t love from the first page so it really me had to win me over. First, the second novel did end quite traumatically for Pip but I wasn’t a fan of Pip’s paranoid thoughts (PTSD if you want) and the manifestation of that fact with Pip imagining seeing blood on her hands quite a few times. It’s perhaps possible but I’m still not a fan. Secondly, the novel started slow although there’s an indisputable threat directed at Pip that is designed to keep the reader guessing early on and tension was building with each new message she discovers closer and closer to home. I enjoyed the clever way someone is trying to frighten her and yet I still felt that the plot took its time getting the story to where it should be, especially because there’s a major shifting of gears with one pivotal scene kicking the novel up a notch or ten and then never letting go again.

This pivotal scene and everything that happened after shows a Pip at the top of her game. I loved everything that came after that. I hadn’t seen her like this before, so brilliant, so controlling, so impressive. Her skills and all the knowledge she has acquired while working on her podcasts, she has to put them all into practice. I learned a few new things about death bodies too as she includes a report on how pathologists use rigor mortis, livor mortis and algor mortis to determine the time of someone’s death. I found all of this very interesting and I’m sure I won’t forget about it soon.

The second half of the novel was very addictive and I had to know if Pip was going to succeed. Sidekick Ravi was absent from the second novel but is back in As Good As Dead to take his place next to Pip and their connection, the support he gives her is wonderful. They are the bestest team!

The author promised a thrilling novel and she kept her promise, I loved the direction she took with this novel. I wasn’t expecting Pip to surprise me so much after her ‘weak’ start but she’s really coming through and this third novel is a wonderful conclusion to the series. It certainly ends on a high for me! And that last line.. I was sooo happy with it!