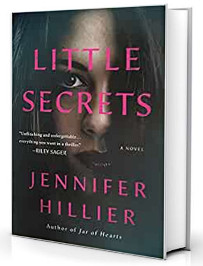 Marin had the perfect life. Married to her college sweetheart, she owns a chain of upscale hair salons, and Derek runs his own company. They’re admired in their community and are a loving family—until their world falls apart the day their son Sebastian is taken.

A year later, Marin is a shadow of herself. The FBI search has gone cold. The publicity has faded. She and her husband rarely speak. She hires a P.I. to pick up where the police left off, but instead of finding Sebastian, she learns that Derek is having an affair with a younger woman. This discovery sparks Marin back to life. She’s lost her son; she’s not about to lose her husband, too. Kenzie is an enemy with a face, which means this is a problem Marin can fix.

I loved reading Jar of Hearts, the first title by this author that I read back in 2018. Little Secrets was published in 2020 and I recently found out that Jennifer Hillier has a new novel on the way in 2022 called Things We Do In The Dark which sounds pretty amazing so I wanted to get up to speed before this new title arrives. This is mainly why I decided to read this as my next book pick.

I really enjoyed Little Secrets even if it has a very different feel and style compared to Jar of Hearts. After I finished reading it I can attest she’s still this brilliant writer who very well knows what she’s doing, luring everyone in like she did in Little Secrets and then captivating you with the small cast, only to circle back in the end to show how it all fits together.

Even if I was expecting something a little differently, with perhaps more high tension throughout the story, it did pull me in right away with the brutal abduction of Marin and Derek’s little boy Sebastian in the first pages. The adrenaline dies down quite abruptly then though with Marin attending a group counseling session where the author seemed to want to have the reader hear from missing children’s parents how they feel and struggle. The focus of the story shifts further towards Derek’s affair. The whole mystery and search for Sebastian seemed to be put on the backburner suddenly and isn’t talked about much anymore which felt a little strange as I expected it to be the main focus of the novel and what I really wanted to find out about, but soon enough I did get caught up in Marin’s knowledge about the affair of Derek and Kenzie Li and especially in what she was going to do about it. There was a moment that I felt I had read Marin’s resort of action before in another novel this year, but I was happy to find out that it only became more surprising and exciting from hereon. The author also gives Kenzie Li a voice in the story which I appreciated because she has her own story to tell and while I sometimes hated her, my sympathy for her grew as well at other times.

Hillier delivered a great psychological thriller with lots of drama and emotions. With not many pages left in the novel I suspected how it would all finally unravel but the anticipation was very high. Was Marin going to find her son and the person who took him? The author kept me well in suspense! I’m definitely putting her next novel on my wishlist!

I bought an ecopy of this novel. This is my honest opinion.