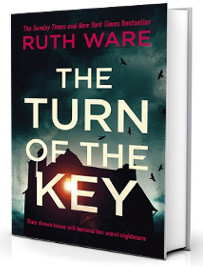 When she stumbles across the advert, she’s looking for something else completely. But it seems like too good an opportunity to miss: a live-in nanny position, with a staggeringly generous salary. And when Rowan arrives at Heatherbrae House, she is smitten by the luxurious ‘smart’ home fitted out with all modern conveniences, by the beautiful Scottish Highlands, and by this picture-perfect family.

What she doesn’t know is that she’s stepping into a nightmare – one that will end with a child dead and her in a cell awaiting trial for murder.

She knows she’s made mistakes. But, she maintains, she’s not guilty – at least not of murder. Which means someone else is.

The Turn Of The Key is the creepy novel you didn’t know you needed (or wanted) to read. I’m not especially very much into scary novels myself and I stay far away from everything that might seem ghostly but this novel is an exception and I could hardly put it down.

The way the novel started alone was already a great beginning. Rowan writes to a solicitor to take her on as a client and explains that she’s accused of murdering someone but that she didn’t do it. What she doesn’t do is disclose the name of that person in her letter. It’s a high profile case so the solicitor will know very well who it is but the reader is kept in the dark. There are not so many characters in the novel but it remained an absolute mystery until the very end why or how she might have done it.

Rowan hadn’t even set foot into Heatherbrae, the house of the Elincourt’s and already I was having unsettling vibes from the house itself so the impact of the intrusive high tech, combined with not so cooperative or friendly children to nanny and things that go bump in the evening or night.. well you know this one will play on your mind!

The whole novel is suspenseful from beginning to end and her writing was very convincing in making me believe what was happening. Things go missing which was bad enough but the strange sounds really made the goosebumps raise on my arms because I couldn’t find any reasonable explanation for it.

Rowan has her arms full with Petra, Ellie, Maddie and Rhianon and I wondered for which of the four children she was arrested and if she really was innocent. The story ends with another letter which gave some much needed answers and I love how the author brought the truth to light in this way. Even so, it still ends with some mystery about Rowan’s fate. I have my own thoughts about what happened to her in the end (convincted or not convicted) but I’ll never know for sure.

This is the third novel I read by Ruth Ware (after The Lying Game and One by One) and I definitely haven’t had enough. I’ve already added her next novel IT Girl (expected July 2022) to my readlist!

I bought a copy of this novel in a secondhand bookshop. This is my honest opinion.