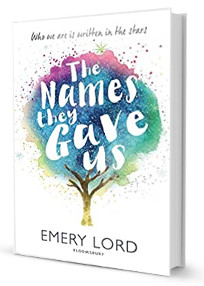 When it all falls apart, who can you believe in?

Everything is going right for Lucy Hansson, until her mom’s cancer reappears. Just like that, Lucy breaks with all the constants in her life: her do-good boyfriend, her steady faith, even her longtime summer church camp job.

Instead, Lucy lands at a camp for kids who have been through tough times. As a counselor, Lucy is in over her head and longs to be with her parents across the lake. But that’s before she gets to know her coworkers, who are as loving and unafraid as she so desperately wants to be.

It’s not just new friends that Lucy discovers at camp—more than one old secret is revealed along the way. In fact, maybe there’s much more to her family and her faith than Lucy ever realized.

I bought a copy of The Names They Gave Us in 2017. The cover sparkles so beautifully in the sunlight so that’s one of the reasons why I couldn’t resist, as well as for the glowing reviews I read at the time. But as the story goes so often, I lost sight of it until I recently held it in my hands again when I was looking for something emotional and charming to read.

After reading a few pages I did wonder if I would be able to fully enjoy this novel because I discovered right away that Lucy, the main character, is the daughter of a pastor and a very religious girl. She takes her faith pretty serious and at the start of the novel she’s struggling a bit with it after she finds out her mother is diagnosed with cancer for a second time. I don’t have anything against her faith but I was a bit afraid that I wouldn’t be able to build a connection with her. I needn’t have worried because Lucy was easy to sympathise with after all and the religious context doesn’t take over the story. As the novel progresses she becomes a lot more worldly and in the end her belief is integrated into a message of a more general nature.

Upon her mother’s request Lucy’s not going to church camp with her parents like she does every year but she’s filling in for someone at the Daybreak Camp on the other side of the lake. In Lucy’s opinion that is a ‘hippie camp’ but she can’t possibly say no to her mother when she’s just been diagnosed with cancer.

If there’s one thing I can say is that her stay at Daybreak Camp is a real eye-opener for this girl who lived such a sheltered life. This is a camp for troubled teens (where Lucy is responsible for a bunch of 8 and 9 year olds) but the camp leaders also come with their own baggage. This novel tackled several difficult topics, with loss and identity just to name some, but it never felt too heavy on me and there were lots of beautiful and fun moments too. It’s really not a sad book! The attraction to Henry was cute as well but I wouldn’t call this a romance novel, the focus fell more on the development of Lucy’s friendships and it definitely shows in the end how important they’ve all become for her.

‘What is a group of friends? A relief, a scaffolding, a safety net,…’

The camp and the people in it changed Lucy and she grew tons in this transformative novel. The Names They Gave Us refers to the labels the kids in Daybreak Camp get – even from Lucy before she arrived – but they are not just a group anymore, they are individuals and their personalities and voices touch Lucy and touched me as a reader as well. This novel holds a torch for more acceptance and understanding and delivers the message perfectly, without it being too much of a lesson but simply by showing some wonderful people and how they deal with things that life threw at them.

I enjoyed this novel more than I expected when I first started it so absolutely don’t let the religious background scare you off to read this one! I had a warm feeling when I finished reading it.

I bought a paperback copy of this novel at a local bookstore. This is my honest opinion.

Follow The Belgian Reviewer on WordPress.com
Join 5,352 other followers