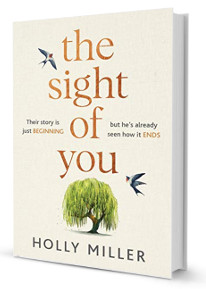 Joel is afraid of the future.
Since he was a child he’s been haunted by dreams about the people he loves. Visions of what’s going to happen – the good and the bad. And the only way to prevent them is to never let anyone close to him again.

Callie can’t let go of the past.
Since her best friend died, Callie’s been lost. She knows she needs to be more spontaneous and live a bigger life. She just doesn’t know how to find a way back to the person who used to have those dreams.

Joel and Callie both need a reason to start living for today.
And though they’re not looking for each other, from the moment they meet it feels like the start of something life-changing.

This is one of those books that take a bit of time to get over them and this one is asking for a couple of days… even though this novel is so bittersweet in the end, I want to keep it alive in my head for a little bit longer. Ever since I read The Man Who Didn’t Call I’ve been searching for a novel to match it, a novel that could make me feel the same way and I had to wait until this one to finally find it, The Sight Of You is the answer to my quest. I felt my throat closing up and a single tear (that’s all I’ll admit to!) might have snaked its way out of the corner of my eye. My suffering was silent, much like how this novel presented its secret. Nothing was overdone or written to be sensational or super dramatic, there was in fact just a quiet kind of sadness that you can feel and read throughout the pages.

I love novels about impossible love stories, but is this one impossible? At times I thought so, other times I felt the exact opposite. There’s so much love though, even if people keep fighting it, if they don’t admit it, if they don’t want to fall in love. What are you going to do? The heart wants what it wants and love hurts, every single time. And then it really begins. Joel has dreams about the people he loves. It’s his best kept secret and has messed up his life since he was about 9 years old. So you can’t blame him for not wanting to fall for Callie. It’s not a big surprise how the story develops, the title is pretty much an omen, but that doesn’t matter because it’s just written with the right amount of dazzle.

My heart is so full for this novel, and I think I could talk about it for days. It’s very much a head versus heart kind of novel, and one that makes you think too. How would you react? There’s an important lesson here to live your life and I was happy to see both Joel and Callie do just that. A beautiful novel, very highly recommended! Don’t miss out on this heart-breaking tale!

I received a free copy of this novel from the publisher Hodder and Stoughton in exchange for my honest opinion.