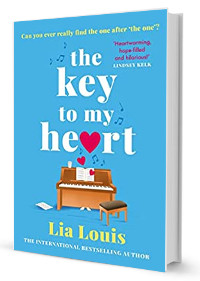 Can you ever really find the one after ‘the one’?

Some people spend their whole lives trying to find the one. But Natalie had found him – and married him. And then Russ died.

Two years ago, her whole world was shattered. Still now, she feels like she’s trying to piece her broken heart back together, one day at a time.

But then she finds a sheet of music – one that only Russ would know – in the piano stool in St. Pancras station where she’s secretly been playing for the last few months.

For the first time, Natalie realizes that maybe life does still hold a little magic. And with every note she plays, she feels as if she’s unlocking another fragment of her heart…

But will she ever truly find love again after she’d already found forever?

When you ask me to list a few romance authors I love reading, Lia Louis is definitely on that list. There are not many authors who can give me a book high but that’s how I feel right now. I absolutely fell for Dear Emmie Blue and The Key to my Heart is a very close second. This novel gave me a bad case of emophilia (it’s a real condition!) but it only concerns fictional characters so far.

The Key To My Heart is about Natalie’s life after having lost her husband two years earlier. People feel she should have moved on by now but Natalie is stuck in a space in her head between the past and the future, she’s struggling to cope alone with some things, some of a practical nature and some more emotional. She doesn’t know for instance what to do with the cottage they bought together and were going to renovate, nor how to tell her friends she’s not ready to date anyone.

I loved the mysterious element in the novel of someone leaving sheet music in the piano seat at the train station. It was very clever how the author wrote this novel so it wasn’t obvious who it was, not even to me. I enjoyed how the music was a lifeline and made her open up. She’s on a quest to find out who left it and why (both were quite surprising!) and while she’s sharing her findings with her friend Shauna who works at the coffee shop Goode’s, Tom The Target and her girlfriends, she’s slowly healing as well and getting her appetite for life back. It was such an original approach and if I ever find a piano in a train station it’ll certainly make me smile from now on.

There’s lots of incredibly wonderful banter in this novel that starts almost as soon as I opened it, so the connection between Natalie and one of the male characters was immediate and the possibility where this could lead was already dreamed up in my head. But she’s not interested in a romance and he’s scared of love and crocodiles so instead they become great friends. His support was great and I saw how she begun to change. Of course there’s also another swoonworthy man that crosses Natalie’s path and he understands her grief better than anyone else, having lost a family member himself. Would he be the one who makes her heart full again? I actually had my heart set a little bit on the first guy but they were both adding to the story and supporting Natalie in a beautiful way.

Lia Louis knows how to struck a chord with her writing. A big part of the novel is about Natalie’s friendship with the people around her and her connection with Tom and Joe, and that alone gave me a warm and good feeling but in the end there’s a very touching and epic scene that totally got to me. She definitely found the key to MY heart.

I feel I can’t do this novel justice with my review so forget all I said and just remember I can’t recommend this novel enough!