It’s that time again! I’m very excited to have Lisa on the blog today! Go check out Lisa’s blog Rambling Lisa’s Book Reviews if you don’t know it already. You can take my word for it because we’ve talked by mail often enough that she’s an incredibly nice and lovely lady. I’m also very happy she wanted to help me out here with my questions. So hereby: thank you Lisa :-).

Let me lift a little tip of the veil already by sharing a few things I learned from her blog: Lisa likes the winter season, gardening and walking her dogs. Lisa (previously nicknamed Lazergun, you’ll have to look up the story on her blog, it’s a pretty cool nickname and a nice story too) is actually a big animal lover and has dogs, a cat and a tortoise while she’s allergic to most animals :-). She started 2 other blog sites before her bookish one (one about her daughter and a beauty blog), she likes to eat Lemon Drizzle, Black Forest Gateau or the cake that GLaDOS promises (it’s a gamers reference apparently). She hates monotony and doesn’t do meme’s, but she does write amazing reviews about books that take my interest (and probably yours as well).

Ah and I almost forgot one of the most important features: she organises book swaps! There’s a form on her blog that you can fill out and she’ll try to match you with someone in the same genre. Go and check it out!

Anyway this was a long introduction and it’s time for the official Q&A:

Age: I have been 27 for about 7 or 8 years now. Actually, my age causes me much despair when I am buying over 18 products. In the U.K. if you look younger than 25 and are buying alcohol, cigarettes and so on you have to produce I.D. Because I constantly am asked for I.D. I carry my licence into shops with me. One day, recently, I was buying gin and was asked for proof of age, as usual, I laughed and said I’m in my 30s. The woman laughed and said, “I believe you are barely over 18 but you are no way 25.” Then she looked my 4ft 10in daughter up and down (she is 9) and said: “I suppose you are going to tell me this is your daughter along with you being in your 30s?!” I couldn’t stop laughing and told her that yes this is my daughter and she snorted at me muttering “Yeah right!” So at this moment I got really cross and thrust my licence in her face and said: “There you go, over 25 by many years and mother to this child!” She was in complete shock, I mean her jaw hit the ground and her response to my age was “BLOODY HELL!!” and went on to tell me I didn’t even look 20. I made it quite clear that no one in their teens, trying to get away with pretending to be older, is going to claim they are in their 30s!! Oh, and she has yet to say sorry!

I am a perpetual student but I studied English Literature and Classical Civilisation. I went to night school to get my certificate in Beauty Therapy and then a number of years later Photography.

I was a full-time Photographer but living with Chronic Pain it got harder to commit to jobs so now I take photos and sell them. Can I say I’m a blogger as a job even though I’ve yet to make money?? 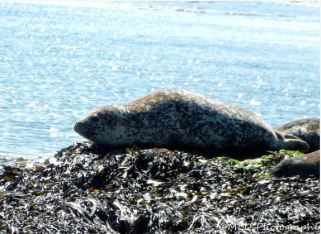 Do you have any other hobbies?

I love photography, going on walks in forests, taking my dogs out and eating….I’m sure there are many more things but that’s all I can think of right now! 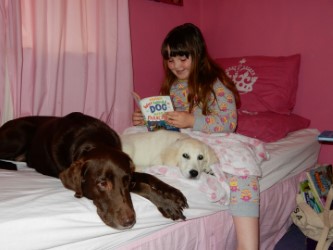 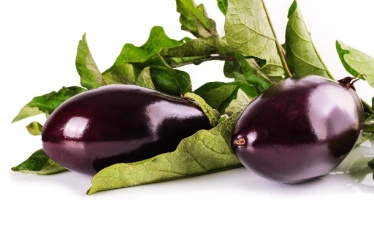 Do you collect anything (besides books)?

Anything miniature! It started with little baby dolls about an inch in size that my Grandmother took me to buy every week or so. They were 50p, in the 80s that was a lot of money, and it was a lucky dip so I ended up with multiples and never swapped them.

I, now, collect perfume bottles, elephants, peacocks, old style razors, everything miniature….people used to think I collected (real) dogs as we had so many at a point! 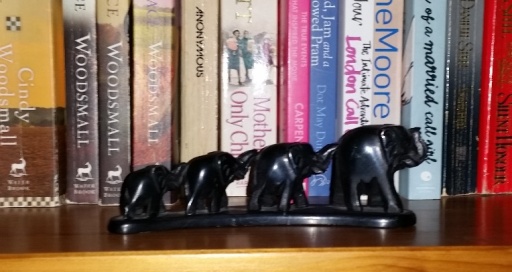 What’s the name of the book that you’ve had the longest? Have you read it?

Truthfully this one is too hard to answer as my house was like a library. We were all born with Bibles in our hands in my house so I could say that but there is a book I remember from my childhood that I read every year in life and then we read it to my bump and then to our daughter every Christmas.

Have you ever regretted a book you purchased? A book that sounded so promising but you wished you’d have spent your money on another book after reading it?

I’ll likely get hate for this but I have to say ‘The Girl on the Train’. Almost everyone I speak to loved it but I really disliked how rushed it was at the end. I actually yelled at the book!

Do you listen to audio books?

Had you asked me this a few months ago I would have said that I do when I want to sleep however I have grown fonder of them lately. They are great to listen to while blogging, driving, gym, dog walking… 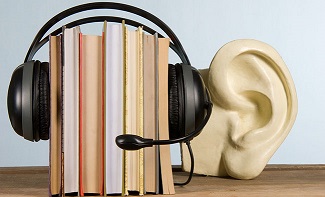 Do you have a favorite genre?

Crime thriller would be what I mostly read but I have a place in my heart for Terry Pratchett although I don’t generally read other books that fall into the wacky genre that he writes.

Sir Terry Pratchett was the acclaimed creator of the global bestselling Discworld series, the first of which, The Colour of Magic, was published in 1983. In all, he was the author of fifty bestselling books. His novels have been widely adapted for stage and screen, and he was the winner of multiple prizes, including the Carnegie Medal, as well as being awarded a knighthood for services to literature. Worldwide sales of his books now stand at 70 million, and they have been translated into thirty-seven languages.  Sir Terry Pratchett died on 12 March 2015.

What is the book highest on your wishlist right now?

I don’t have one! I haven’t been paying attention to what is coming out and I am a person who when I want something I generally buy it.

How is your library organized?

Do you read more ebooks or physical books?

I prefer actual books, I have a real distaste for ebooks but at the moment I read them the most.

Do you have a favorite book?

I was asked this recently and one of my answers was ‘Little Women’, which is true, but after I sent the answers through to the blogger I realised I actually love ‘The Hundred and One Dalmatians’ by Dodie Smith – the book the Disney film is based off. Would probably be a tie between both those books.

What’s the cover in your collection that you’re most proud of?

I have a leather bound copy of John Bunyon’s ‘The Pilgrim’s Progress’ from the 1800s.

Ummmm *whispers* over 1000 and that’s an underestimate.

What’s the title of the last book you purchased?

The last ebook I bought was ‘Be My Killer’ by Richard Parker. The last actual book was actually an order for both ‘Sometimes I Lie’ by Alice Feeney & ‘The Trouble with Goats and Sheep’ by Joanna Cannon.

Blurb Be My Killer

Her eyelids were the only parts of her body she could move. The figure spoke, then retreated into the gloom. She couldn’t accept what they’d said. How could she have brought this on herself?

When an online prank goes viral and triggers a spate of gruesome murders, documentary maker Hazel Salter watches in horror. But then a new victim is found, her body bound to a pillar, and its Hazel’s childhood friend, Meredith Hickman. Hazel must find out what happened to her.

Is it one killer or more? Random, or part of a bigger plan?

The police have no leads, but Hazel has a theory – one she’ll stop at nothing to prove. With her film crew in tow, Hazel sets off for the abandoned amusement park where Meredith was found, to solve the crime, bring Meredith justice, and make the documentary of her lifetime. But as Hazel interviews the victims’ families and friends, people start disappearing.

As the death toll rises, Hazel realises someone close-by is targeting her team methodically. Can she uncover the truth before another life is lost, or will the killer get to Hazel first?

Who was your favorite author when you were a child?

From which author do you have most books?

I went and checked and was positive it would be John Grisham or Terry Pratchett but alas it is Danielle Steel.

Are there books you’ve read 2 or 3 times?

Oh gosh yes but from when I got married I can’t think of any.

How many books are there on your Goodreads challenge this year and how many have you read already?

50 and I have read about 45. Goodreads says 39 though so obviously there are some I haven’t added.

Can you spell your name with the first letters of titles in your book case ? 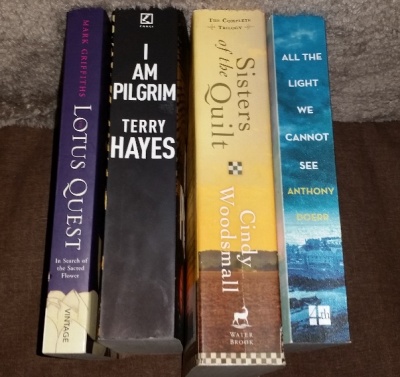 In case you missed it, these are the BFF’s (Blog Friends Forever) I posted about before :

I don’t want my BFF club to be complete just yet! There’s still room for plenty more so give me a shout if you want to be added!