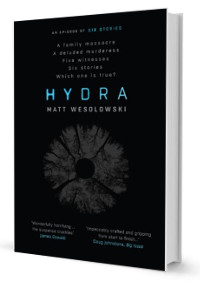 One cold November night in 2014, in a small town in the northwest of England, 21-year-old Arla Macleod bludgeoned her mother, stepfather and younger sister to death with a hammer, in an unprovoked attack known as the Macleod Massacre. Now incarcerated at a medium-security mental-health institution, Arla will speak to no one but Scott King, an investigative journalist, whose Six Stories podcasts have become an internet sensation.

King finds himself immersed in an increasingly complex case, interviewing five key witnesses and Arla herself, as he questions whether Arla’s responsibility for the massacre was as diminished as her legal team made out.

As he unpicks the stories, he finds himself thrust into a world of deadly forbidden ‘games’, online trolls, and the mysterious black-eyed kids, whose presence seems to extend far beyond the delusions of a murderess…

Dark, chilling and gripping, Hydra is both a classic murder mystery and an up-to-the-minute, startling thriller that shines light in places you may never, ever want to see again.

Six Stories is listed as one of my favorite reads of 2017 so I’m very excited I’ve had the opportunity to read Hydra, the second novel by author Matt Wesolowski. This is a standalone novel but follows the same format as before: the exquisite idea of building up a story through the narration of several voices, each time providing new insights and a new angle. It never gets repetitive, on the contrary, with every new interviewee you get a better picture, a better perspective. It pushes you to refocus and adjust your own beliefs and thoughts, it makes you think. When you start reading you might believe this is pretty much a black and white story, she confessed to murder after all, but all the different podcasts that Hydra is made up of provide the perfect shades of gray and will ultimately shine a light on the reasons she committed such a horrendous crime.

I was instantly hit by a feeling of unease and creepiness when I started reading this novel. I’m pretty sure that whatever other review you might read you’ll read this again and again as well. It creeped me out so much, I had frissons running down my spine the whole time. I have not read a novel like Hydra before and it is in fact very different from my usual thrillers, much more atmospheric and the descriptions of the black-eyed children that Arla sees with eyes like soulless orbs scared me quite effectively. I would catalogue this novel under the horror genre more than thriller or mystery and I’m happy that I didn’t know this beforehand because I always thought I wouldn’t enjoy this genre. This novel just proved me wrong!

The whole vibe is heightened even more through Arla’s interest in playing games, games I’d laugh at if they weren’t taken so seriously by Arla. She genuinly believes that you can transition to another world when performing different rituals and that’s what she wants, escape her life here in some way. There’s only one catch, if you don’t do it right then something could come back with you… Even if you don’t want to believe any of it, the setting creates just the perfect sense of unease and a menacing, dark atmosphere that is carried on from start to finish.

The dark music Arla listens to and the messages she finds in the lyrics, the frightening Elevator Game she plays, her disturbing behaviour, her isolation in the family because she’s not so perfect as her little sister, the light it shines on her strict and pious parents.. all of it made me mull over and investigate its significance on my own. What is it that set her off, what were the signs that she wasn’t doing well? Hydra is a novel that you can really sink your teeth in, the possible triggers why she might have gone off the rails are all held up to the light and scrutinized and little by little we get to the core of the story. I  truly am a big fan of Scott King, the presenter of the podcast. He’s intelligent, dedicated and unstoppable. While he’s preparing his podcasts Scott is receiving threats to stop the series. It’s very mysterious who and especially why someone would want to put a stop to this and it was definitely an extra bonus that was added to the story.

In the end I actually felt sorry for Arla, a very surprising feeling that I marvelled at when the realisation hit me and something I couldn’t believe would be happening at all when I started reading this novel. I am also sure this didn’t have to end this way, which makes it so tragic and sad.

This truly was an amazing read to kick-off the year and one that will be lingering in my thoughts again for a long time. Hydra was everything I wanted it to be and more; I couldn’t have wished for a better sequel. A very recommended read!

I received a free copy of this novel from the publisher, Orenda Books, in exchange for my honest opinion.

Don’t forget to check the other stops on the tour as well, I’m sure you want to hear more so check out today’s other stop @Portable Magic ! 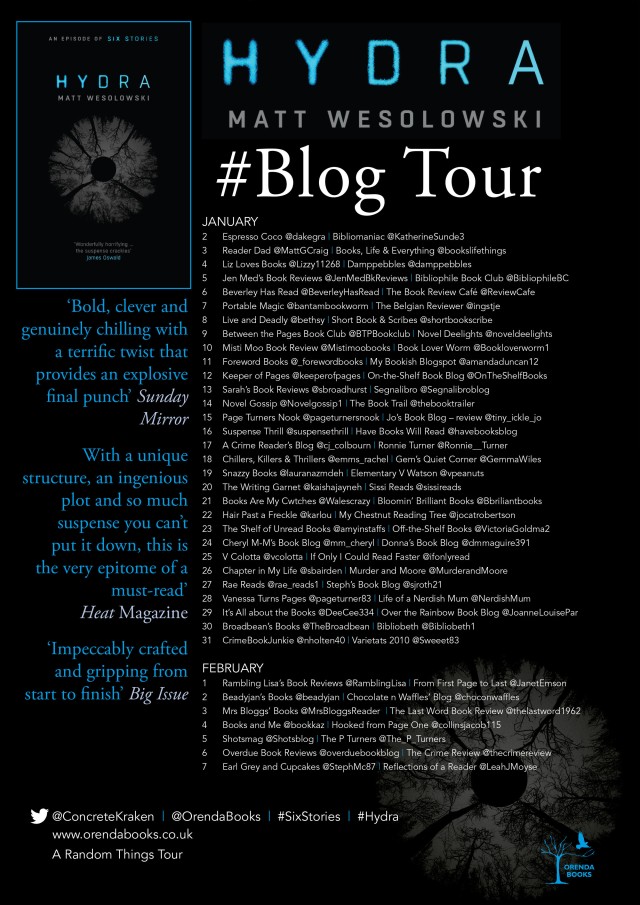