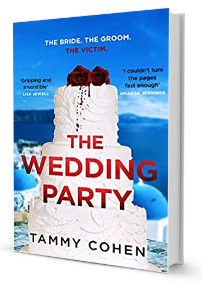 Lucy has dreamt of her wedding day for as long as she can remember.

And now the day is almost here. Her nearest and dearest are gathered on an idyllic Greek island and she just knows it’s going to be perfect. It has to be.

But even the best-laid plans can go horribly wrong. Why are her parents behaving so strangely? Why won’t the rather odd lady from the airport stop hanging around? Who is the silent stranger her sister brought as a plus-1?

And then they find the body.

It’s going to be a day to remember.

Lucy has a dream that many brides-to-be share, getting married on a beach in the sun, surrounded by close friends and family.

I know that if anyone can spin this dream image into a nightmare it’s Tammy Cohen and she does it with verve. I wanted to keep on reading this novel all day long and every free moment I had I picked it up again and found myself surrounded by a family that I came to know as close as my own which is how I ended up reading this novel in record time.

Lucy and Jason chose sunny Kefalonia in Greece to have their dream wedding. Lucy’s parents Hazel and Dom and sister Jess are invited and Jason has his mother Cora with him and they also both have their best friends by their sides, Shelly being Lucy’s friend and Gil and his wife Zoe are there for Jason. The cast isn’t complete yet, there’s also the wedding planner Nina, Jess’s surprise guest and Vivian, an old woman who happens to be around a lot.

In the first pages of the novel there’s a body found but the author doesn’t let on who it is. There are extracts from police interrogations with several characters that helped me mostly to eliminate who wasn’t dead, but it didn’t really mean I found out who the killer of the party was. There were also Therapy Journal entries that told of a very tragic childhood and this person’s history up to the present. I didn’t have a clue whose point of view this was so I tried to figure out first whether it was a man or a woman and when I knew that there were still several people who could fit the bill because quite a few of them were acting dodgy about their past.

That alone would have kept me busy but no there was a lot (A LOT) more going on. You see, this story really is riddled with secrets, and everyone seems to be hiding something. I had the feeling I couldn’t trust anyone here and there was motive enough for killing but I couldn’t really see it in any of them… and yet, it did happen in the end. I must say I was kind of surprised after all but more than that, I was actually feeling a bit sad and I felt even sadder for the person who died when more about the past events came to light.

The Wedding Party is a novel filled with lots of domestic drama and tragedy. It is especially that tragedy and the psychological pain one of the characters feels in the novel that made it so noteworthy and memorabel for me and this character’s personality was developed so well that they krept under my skin. The novel has a great cast of characters and they each contribute to the story brilliantly. I’m sure it will surprise you in the best way! It’s definitely a novel to read for fans of Catherine Cooper (The Chalet) and Lucy Foley (The Hunting Party).

You can read my previous reviews of novels by this author here: Dying for Christmas (still my favorite one), They All Fall Down, When She Was Bad.

I received a free copy of this novel from the publisher via Netgalley to read and review in exchange for my honest opinion.

22 thoughts on “The Wedding Party by Tammy Cohen #BookReview @TransworldBooks”